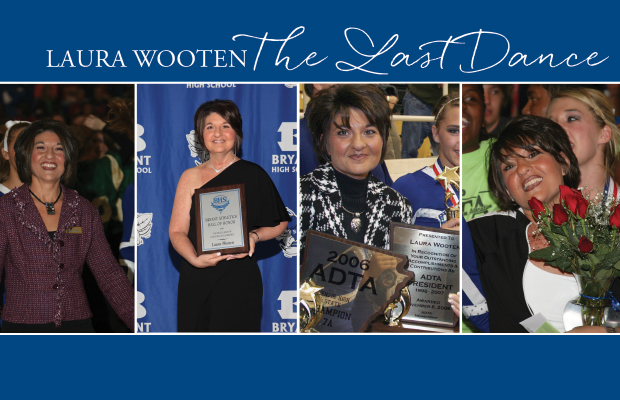 For 28 years, Laura Wooten has felt at home with her dance girls, coaching them to victory; but more importantly, she has made positive lasting impacts on them. The Bryant dance coach retires this year and leaves some big shoes to fill.

Choosing to retire was one of the hardest decisions of her life, Wooten says. “I have had some health issues going on that forced me to retire. It has been a very hard decision. My body is telling me it’s what I have to do, but my heart is still with my girls and my students.”

Former student Mallory McElroy says that during her time with Wooten from 2005 to 2008, her coach was a constant source of guidance, support, love and light from the moment someone earned a spot on the team. “Her impact on my life, and the lives of ‘her girls,’ is still unfolding because she found her passion and did it 110 percent.”

She recalls, “Upon someone’s making Mrs. Wooten’s team, she recites a poem about us being a role model to the little girls that we were just moments before. Throughout the three years on her team, she molds us into these role models, full of perseverance, determination, and a work ethic that can’t be beat. And after dancing our last, we go out into the world as these role models, knowing we have the ability to do anything in life, if you only set a goal and work hard to achieve it, regardless of the challenges in your way.”

Former student Courtney Patton-Probst first met Wooten when her father (Coach Patton) was the head football coach at Bryant High School. “I remember being in the stands at 7, hoping for the day that I would be old enough to try out for her team,” she says. She also recalls the poem, adding that the most important responsibility dance team members have is to be that role model to those girls in the stands “like me,” watching and wanting to grow up to be on the dance team.

Bonnie Nixon, another former team member, says Wooten is a true pioneer for dance teams in Arkansas. “She has worked relentlessly to educate coaches and dancers and to help make it a respectable sport for the state. She was a true leader by example, and I know she honestly cared for each and every one of us. The values and lessons I learned from being under Mrs. Wooten’s leadership have helped mold me into the woman, businessperson, wife and mom I am today.”

Wooten became a Bryant Hornet long before she became a teacher and coach. She moved to Bryant when she was 10 years old, starting the fifth grade at Bryant Elementary School. At Bryant Junior High, she was a member of the first junior high drill team. She furthered her drill team journey in high school. In 1990, she says, she was lucky enough to be hired to teach at Bryant Junior High.

“At the end of my first year of teaching, my coach (the first and only coach to have the team) asked me to take over. I was honored and so very excited; I gladly accepted. My awesome journey began. I had the junior high team for five years, and then my high school coach that had been there for 16 years asked if I wanted the high school dance team. Of course, I accepted.”

All the games were important to Wooten throughout the years, but as any Saline County school participant can attest, a favorite game is the annual matchup between Benton and Bryant at the Salt Bowl. One of her favorite traditions is that both dance teams have the privilege of performing. “Whether you are home or the visiting team, both dance teams perform for the Salt Bowl,” she says.

Watching her teammates grow from “little girls into strong, independent, responsible young women” is one of her favorite aspects from coaching. As for the national titles the dance team has garnered throughout the years, Wooten says she doesn’t think she did anything special.

“I simply gave the time and energy, and had a passion for coaching. My girls are the ones that made the championships happen – their desire, heart, dedication, and passion for the sport all set us apart. I also had dance team parents that were so very supportive and made sure we had what we needed to be successful.”

The past 28 years “have truly been amazing,” Wooten notes. “Have they been without challenges? No; but to me, being able to push through is what keeps you going each and every day. If you didn’t have those challenges, life would be boring. My parents have always taught me to be persistent and to never give up! Work hard, be loyal, and have faith that all will be okay.”

Patton-Probst says she is fortunate to have stood beside Wooten – whom she also considers her friend and second mom – at numerous competitions and nationals since graduating in 2007. “I was able to be there for her as she has been for me over the years. At the end of the day, we were always ‘one family that comes together two win,’ known as ‘1FC2G2W.’”