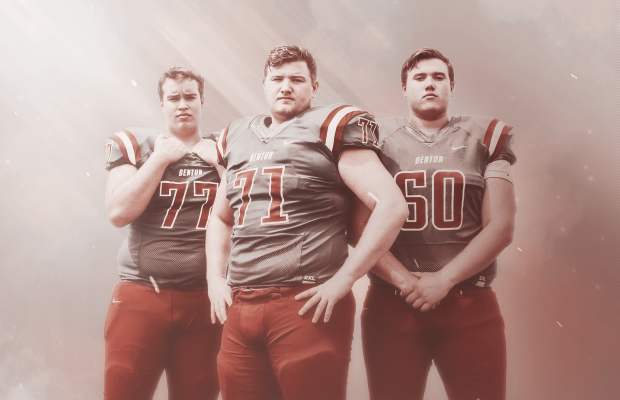 Expectations for the Benton Panthers are high entering this 2018 season.

With more than 100 players expected on the team, coupled with more experience than the program has seen in years, Head Coach Brad Harris appears to have this team primed and ready for a shot at a 6A State Championship.

“Football is important again, and we think we have a pretty talented team this year,” he said. “I know that it’s only on paper right now, but we like what we have a lot.”

The Panthers look to be charged offensively by returning running back Zak Wallace, slot receiver Gavin Wells and wide receiver Michael Allison. “There’s a lot of talent there, a lot of options with what those guys can do,” Coach Harris said.

“It’s great for these three young men,” Harris said. “They’ve played their entire high school career together and will be finishing it together this year. It’s not something you see all the time, three players of this caliber coming through Benton together.”

Many consider Josh George one of the key leaders for the program. Coach Harris describes him as the most well-rounded of his returning starters, who has made significant strides in the weight room, adding needed strength headed into his senior season.

For Josh, though, pursing football is a bit of a family tradition, and being a Benton Panther was something he always dreamed of.

“My father is a football coach, and I’ve been playing since first grade,” he said. “When other kids were getting bedtime stories, my dad and I were breaking down film. This is something I’ve always known as one of the great loves of my life.

“My whole life, I always said, ‘I can’t wait to be a Panther.’ Now this is my last season in Benton and it’s crazy to think about. I try not to think about it. I just focus on getting stronger and better.”

Flanked to Josh’s left is senior tackle Jenson White, a player Coach Harris praises for coming a long way in a short period of time.

“He’s a kid who has a lot of upside. He was tall and lanky when he was younger but has really developed over the years,” he said. “Of the three, he’s probably the most athletic. He has great flexibility and ability to move from side to side, which is impressive for someone his size.”

Jenson was injured early during the 2017 year, so coming into his final season he sees this as an opportunity to end his high school career on his terms.

“This is it,” he said. “I’m going to go out there and give it everything I have. We’ve got some big goals for this season, and I’m going to do all I can to help us get there.”

At right tackle is James Durling. He’s the largest of Benton’s Three J’s. He’s one of the team’s quiet leaders, and that’s something he’s more than happy with.

“Yeah, I’m a pretty quiet person. I think Coach Harris and my teammates would say that,” he said. “I do my best to lead by example and let my playing do all of the talking for me.

“Football has been a very important part of my life. It’s taught me how to push through and overcome challenges, not just on the field but off of it as well.” Challenges will certainly present themselves early and often for the Panthers. Navigating their way through a difficult schedule in the 6A West and non-conference games with Arkadelphia and Cabot will be a tall task. However, it all starts Aug. 25 in front of 30,000 fans at War Memorial Stadium and The Salt Bowl against the Bryant Hornets.

“The atmosphere is amazing,” said Jenson White. “The nerves are real when you first walk on the field and the game kicks off. After that, you just settle in and play the best you can.”

“Last year was my first year to really play, and I grew to understand the importance of the hype that came with it,” said James Durling. “I remember being completely drained last year when it was over.”

“The Salt Bowl means everything, and we’re due a win,” said Josh George. “Not a lot of kids can say they played in front of 35,000 people. It’s a special game and an atmosphere you don’t get anywhere else in Arkansas.”

Each of Coach Harris’ Three J’s is already planning for life after Panther football. Josh and James have received scholarship offers to play in college, with more expected.  Jenson says a future in football may not be for him. His focus, right now, is on college at either Arkansas or Ole Miss where he intends to study to be an orthodontist.

“I’ve always been fascinated by the practice and like the idea of doing something that combines science and being hands-on,” he said.

There are some high expectations behind the size and experience of Josh George, Jenson White and James Durling. It’s a challenge they’re ready for and a heavy burden that doesn’t seem to be too much for their broad shoulders.