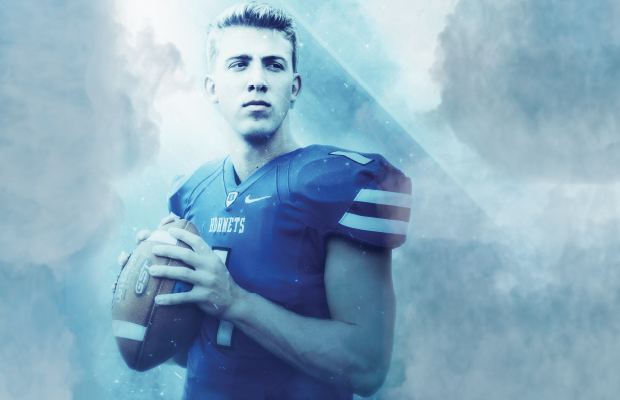 Ren Hefley began his academic and athletic career outside Saline County, but that has not stopped him from feeling like an automatic insider—in fact, when you talk to him, you realize he feels like he has lived here his whole life. Seeing as he is the starting quarterback for the Bryant Hornets and president of the senior class, it is very clear that Ren’s move to Bryant has not been good only for him, but also for Bryant as a whole.

When asked why he decided to transfer to Bryant, Ren is quick to point to his family’s roots in the area. He shares, “I transferred to Bryant from Pulaski Academy the summer of 2016, which was before my sophomore year. I wanted to go do something totally different, and go to a bigger, public school. It made sense to come to Saline County, as my mom grew up here and we have family here.” He goes on to say, “I couldn’t be happier. God has really blessed me. Everyone has welcomed me from the start. I’ve made so many good friends, and I feel so much support from the town. I love it here.”

Ren began playing football when he was in second grade. In his words, “My brother is five years older than I and started playing sports. I would tag along to practices and games and hang out on the sidelines. I knew at an early age I wanted to grow up and play sports.’ When asked why he chose football, he shares a simple answer: “Camaraderie. Bringing guys together who are so different. I’m competitive and like to win. Football gives me the opportunity to spend time with friends and compete.”

So far, the highlights of Ren’s athletic career are enough to make even the humblest of people crack a proud smile. Ren shares, ‘In junior high, my team went undefeated. I was an 8th grade quarterback for a 9th grade team. This was really significant to me. I also remember the first time I started in a varsity football game. It was my sophomore year and we were playing Catholic High – we won. That was such a big moment. It was my dream to be out on the field.”

One of the words that comes to mind when you talk to Ren is leader. While he certainly holds two very large leadership roles, Ren very humbly deflects any accolades that come with being the quarterback of the football team and the president of his senior class. He says of his leadership style on the football field, “I’ve never been an outspoken leader–I lead through service, hard work, and setting a good example. I believe in never giving up. That’s how I lead the team.”

Off of the football field, Ren shares, “I’m a servant leader. I try to behave as a good Christian. I look up to my dad and how he lives his life, and want to set the same example for the people around me.”

The future is bright for Ren, both on and off the field. When asked about his plans for college, Ren maintains he is keeping his options open about for whom he might play. Several universities have offered him full football scholarships, but Ren knows that how he performs in the first four games of this season will play a big role in his recruitment. “I’m not sure what I want to study just yet, but I do know that playing college football has always been my dream.”

Ren’s off-field interests include musical pursuits–he plays the guitar, banjo, mandolin, piano and is a member of the school choir. Although Ren has a lot going on, he is laser-focused on the upcoming football season, and more specifically the Salt Bowl. According to Ren, “We are ready to play. Our guys are ready to get after it. It is such a big game for us. Our goal is to start and end the season in War Memorial. But for now, all we can think about is the first game against Benton.”

The progression from ‘new kid on the block’ to ‘big kid on the block’ has been quick for Ren, and the recognition he’s received so far has been well-deserved. As he sets his sights on the upcoming football season, there is no bigger game for Bryant than the Salt Bowl, and no bigger opponent than Saline County’s own Benton Panthers.