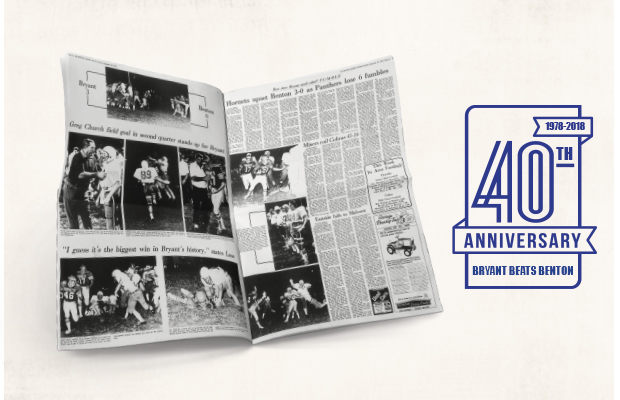 2018 is a monumental year in the history of Bryant Hornet football, as it marks the 40th anniversary of the first win over the Benton Panthers.  Many factors worked together to give the Hornets that first victory over their county rival, but here’s how it went down, according a 1978 article in The Benton Courier by Sports Editor, Scott Morgan: “Six fumbles spelled relief for the Hornets as the Panthers were pinned in their end of the field for most of the game by virtue of their fumbles.”

The only points of the game came in the second quarter, when Bryant’s Mark Jones recovered a fumble. After several plays of gaining and losing gridiron ground, Hornet Head Coach George Loss, formerly at Catholic High (and at the time the most successful coach in Arkansas high school football), sent in Greg Church, who kicked a 23-yard field goal with 1:43 left in the second quarter. The Panthers fumbled 5 more times during the game and Hornet player Joey Self recovered an incredible 3 of the 6 total Panther lost possessions.

The Hornets defense dominated the game, and after managing to run the clock out, the Hornets had “done it” for the first time in their history, defeating the Benton Panthers by a final score of 3-0. Game stats looked like this: Hornets rushed for 110 yards and passed for 24, for a total of 134 yards, and the Panthers put together 135 yards on the night as they rushed for 121 and passed for 14.

In follow-up newspaper interviews, Coach Loss was quoted as saying, “It was a big upset, but those Benton fumbles helped us a lot.” “I imagine this is the biggest win in Bryant’s history. We played as well as we’re capable of playing.”

Forty years later, the memories of that game are still as vivid in the minds of Hornet players Anthony Rushing and Greg Church as they were that Friday night in 1978.

Church, the only scoring player of the game, remembers pre-game excitement at an all-time high. “I think the coaches sensed something big was about to happen, and their enthusiasm was key to all the things they said to us. I remember we had all new coaches and a new stadium. We had already won our first game in our new stadium, and according to the players, a new day had dawned at Bryant High School. We practiced hard and started believing in ourselves. Our spirits were very high.”

In addition to a new stadium and a new head coach, Bryant added position coaches to the staff. Loss brought in Jim Brawner, an All American Razorback from the 1969 team to be defensive/offensive ends coach; Tom Webb as defensive coordinator and linebacker coach; J. R. Ross, a Razorback from the class of ‘78 and member of the 1978 Orange Bowl Champs as defensive secondary coach; and Richard Fulcher, who had just graduated from the same Razorback team as Ross, as offensive line coach.

The new coaching staff brought new strategies and a fresh approach to Hornet football, recalls Rushing. “Former Razorbacks brought an entirely different mindset to us as players.  We had great confidence in these coaches and realized they were putting us on the right track and a mindset towards success.”

The most dramatic change came when Coach Loss told the players they would not have to play both offense and defense, which tended to tire the players by the end of the game. “Coach Loss told us we would not play both ways and that we should decide which side of the ball we wanted to play and what position. The knowledge, drills, and techniques they [the coaches] brought with them instilled in us a positive mindset, and allowed us to realize we were going to be an entirely different team.”

What Greg Church said is true. The 1978 Benton/Bryant game was a part of Bryant High School history that won’t ever be repeated, but what were the ripple effects from that historic Saline County event? For Rushing and Church, the outcomes were long-lasting. “‘Teamwork’ and ‘success breeds success’ are the two lessons I learned by playing football, and I have used them to teach my children important life lessons,” says Church.

“When you believe in yourself, train yourself to succeed, and give any effort 110%, no matter how much the odds are stacked against you, you can succeed with that mental fortitude,” adds Rushing. “We learned a lot about building character, teamwork, mutual respect, and dedication to ourselves and others. These are all key attributes that these men [coaches] gave us, that can and have been utilized by all of us over the past 40 years. That first win against Benton has always been a key event in our lives; we can look back and reflect on how it gave our fellow students and communities pride.”