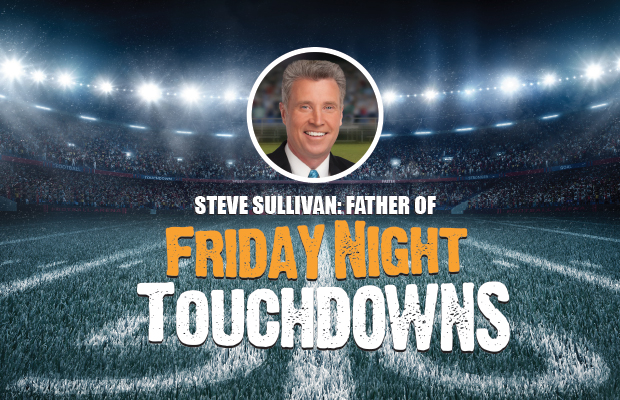 The feeling is electric – the roaring fans, the fight song filling the air and the exhilarating thrill of watching your team score a touchdown. Every fall, there is something special in the air when a community comes together to cheer on the high school football team, and that magic is what keeps KATV Sports Director Steve “Sully” Sullivan loving every minute of high school football.

Growing up in Framington, Massachusetts just outside of Boston, Steve was one of six children and was the only one with a passion for sports. Some of his earliest memories include standing in front of the family’s single television giving play-by-plays of a game for a quick laugh. Steve’s motivation to learn his multiplication tables in elementary school sprang partly from a desire to ensure that his own baseball stats were accurate.

In high school, Steve played baseball, and his team made it to the state finals, where they were runners-up his junior year. When the time came to select a college, Steve chose Arkansas State University (ASU), sight unseen. He wanted two things out of college – an excellent journalism program and a school close to a racetrack for his greyhound, Keentwister. His dog secured one win at Southland Park Gaming and Racing. After the victory, Steve decided to leave the racing world behind and focus his energy on his studies.

When he wasn’t studying or attending class, you could find Steve on campus with his intramural team, The 4th Flush. This independent athletic group was comprised of “a bunch of All-state guys,” says Steve. “Anyone who attended ASU at that time would remember how good we were. We played all kinds of games.”

Steve credits the people and the relationships he made in college for making Arkansas feel like home. “There were a lot of good people who supported me in the community,” says Steve. “It’s hard to name just one. I had so many good friends.” After graduation, Steve made Arkansas his home away from home.

Steve fondly remembers his first Salt Bowl experience. The year was 1985, and before the famous rivalry was named the Salt Bowl it was known as the Saline County Shootout – a rivalry dominated by Benton. Impressively, he can remember the key figures of the night including former Benton High School football coach, Dwight Fite.

While he could not remember who won the game that year, the winners are not the most important detail for Steve; the palpable passion on display at the game is what sticks out in his memory. “The buildup and the excitement is what I remember most,” says Steve. “It’s a friendly but fierce rivalry. It was a fun game for me to cover.” From that moment on, he was hooked. “We cover the Salt Bowl every year,” says Steve. “It’s the best rivalry in central Arkansas, and in terms of attendance, the best rivalry in the state. You get to know the coaches and the teams, and you are invested in the rivalry.”

Most Arkansans know Steve from his infamous “Friday Night Touchdown” highlights every Friday night in the fall on KATV. Since 1999, he’s missed only one Friday night.

“My passion is high school football,” says Steve. “In Massachusetts it wasn’t that big, but here in Arkansas, communities get wrapped up in their high school football team. I always approach every Friday night broadcast like it’s game time. For some of these kids, it’s the only time they’ll get on television. It’s a fun night. I make it a point to do my best to get all the names right and convey the excitement of that night. The older I get, the more I treasure it; I’m not sure how long I’ll be doing this.”

For Steve, even after more than 30 years of covering high school football highlights, the games have never lost their thrilling allure. “It’s more passion than work,” says Steve. “At KATV it’s a team effort on Friday nights getting the players together. We want to have the best representation of the highlights of that game. I enjoy covering high school sports more. I can relate more to the coaches who are grinding out there, and it’s the last time these students get to play as kids. It becomes business once they play in college.”

The 2018 Salt Bowl will take place on Saturday, August 25 at War Memorial Stadium with a 7 p.m. kick off. This year’s theme is “Saturday Night Lights,” inspired by the book, movie and television show, “Friday Night Lights.”

This year, for his 33rd Salt Bowl, Steve has been selected as the honorary coin-tosser. “I am thrilled and honored for them to think of me,” says Steve. “I’ll be covering the game that night as well.”

“Sully is known to all as ‘Mr. High School Football,” says Shane Broadway, Salt Bowl committee member. “‘Friday Night Touchdowns’ hosted by ‘Sully’ has been a must watch for players and families across the state of Arkansas. He has always been a big supporter of the Salt Bowl, and we are honored that we get to say ‘Thank You’ to Steve Sullivan at this year’s game.” ν Ashley Leopoulos