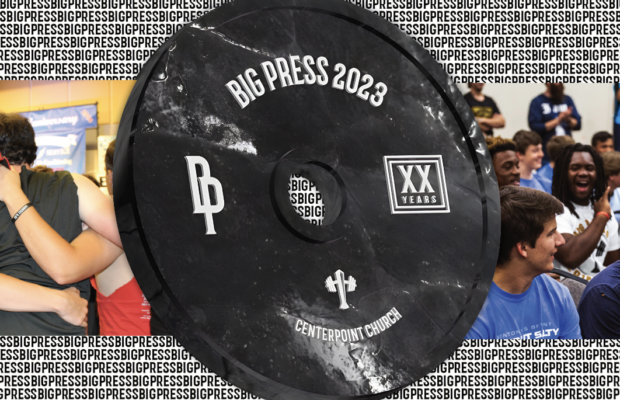 Almost 20 years ago, CenterPoint Church Senior Pastor Pat Dezort issued a challenge to his then youth pastor. “I asked him to come up with a way for us to get our message into the local schools,” he said. “At that time, the youth-based organizations weren’t really big here in Saline County, and we were looking for a way to positively impact students with the message of Jesus.”

That youth pastor and his team returned a few days later with an idea that was both outside the box and perfect for targeting young student athletes. “He suggested a bench press competition,” Pastor Pat said.

“That was 2003, when the inaugural Big Press event took place. The first year was obviously very small. We didn’t have that many lifters, but we weren’t discouraged. We kept at it and believed in our motivation for the event.”

Gradually, the Big Press grew in popularity and in the number of participating high school lifters.

“We finally outgrew the space where we were competing and could no longer hold the event at the CenterPoint Church building,” Pastor Pat said. “So, seven years ago we moved to the Benton Conference Center.”

A few years after that move to the Conference Center, Daniel Christian, 37, joined CenterPoint along with his wife, Jessica, as executive pastor and senior youth pastor. For him, an event like Big Press was ideal.

“It’s an evangelistic event disguised as a bench press competition,” Daniel said. “It was inspired and driven by our love for the Holy Spirit to reach young people where they are. It’s such an exciting experience.”

Daniel grew up in Hominy, Oklahoma, a small town outside of Tulsa. A youth pastor since the age of 19, he feels like he’s following the path of leadership for which he’s been called. Also, for Daniel, preaching is a family affair.

“My dad was youth pastor until he was 40, and I just took it on from him,” Daniel said. “This feels like my calling, and pastoring these young men and women is where I’m most comfortable.

“I’ve been asked if I intend to ever move on to a different route, and I never really have,” he added. “If you age or phase out as a youth pastor, then you go in the direction God leads, but I haven’t felt that pull, yet.”

But while he hasn’t necessarily felt the pull toward a different path, from time to time Daniel admits he is starting to feel a bit “old” when leading his younger congregation.

“My personality has always been a bit younger, maybe a little goofy. That’s probably a big reason why I’ve stayed in this area of the church. Also, I like to quote movies a lot, so when the kids don’t recognize something like Jaws or classic movies starring John Wayne or Clint Eastwood, it hurts me a little,” he said with a bit of laughter.

But it’s also that youthful energy, along with programs like Big Press, that has Daniel so enthusiastic about CenterPoint Church’s future. “[Big Press] has been intertwined in so many parts of our youth program. We have a number of different clubs involving our youth groups. We also have kids and youth camps throughout the year.”

2023 marks the Big Press’s 20th anniversary (there was no event in 2020, due to COVID-19). Depending on the year, as many as ten schools could be represented.

“We’ve had lifters from Hot Springs, Little Rock, and almost all of the schools here in Saline County,” Pastor Pat Dezort said. “We even had someone from Farmington participate.

“The athletes really seem to enjoy the competition, and we work to keep it as close to a regulation bench press competition as possible. Every athlete gets three lifts, and they’re scored based on their performance.”

Pastor Pat and Daniel agree one of the most exciting speakers they’ve ever welcomed to the Big Press was former Arkansas Razorback and NFL running back Peyton Hillis. As luck would have it, his appearance came at one of the best possible times in his career in 2012.

“That was the year [Hillis] was on the Madden 2012 video game cover,” Pastor Pat said. “Having him here was probably a breakout year for us, and it made a real impression on everyone.”

The success of the bench press contest has also drawn the attention of several local businesses and athletic departments, who Daniel says are always happy to help.

“A lot of the local gyms and the Benton Panther Athletic Department have been very generous with us,” he said. “They’ve been kind to loan the equipment, benches, and weights to be used in the competition. Truth is, this couldn’t have grown the way it has without their help.”

The 2023 Big Press will take place Friday, March 10 at 5 p.m. at The Benton River Center. Those interested in participating can visit www.bigpress.org.