Home / Special / For the Love of the Game

For the Love of the Game 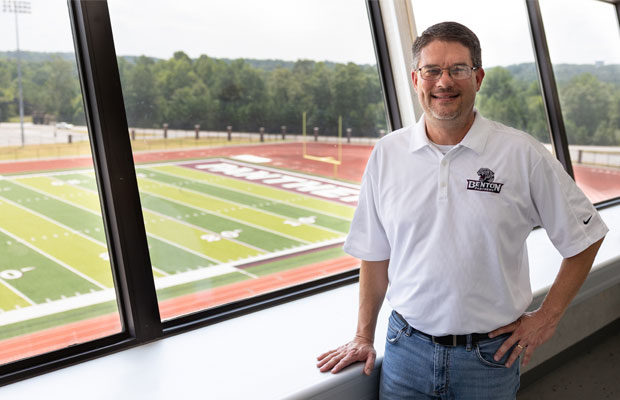 On fall Friday nights, you can find Jim Gardner calling play-by-play for the Benton High School Panthers football team. For more than ten years, Jim has dedicated his time to help bring the thrill of Friday nights to life.

A native of Benton, Jim Gardner has been a fan of the Benton Panthers football for as long as he can remember. One of his first memories is sitting in the stands with his parents and grandfather at the age of six and watching the excitement of the game unfold. From that point on, it became a weekly tradition to watch the Panthers play and it is there his love of the game developed into a passion. “I fell in love with it,” Jim explains.

In 2015, Jim became the play-by-play announcer of Panthers football. “I’m one part of a big team,” explains Jim. “The crew we have is phenomenally good and what they are able to achieve in video production is above and beyond what a typical high school production would look like.”

MM Productions broadcasts the Panther games. The production company is led by Matt Johnson and Mason Woolbright, who produce the state championship games for a variety of sports in Arkansas. “Our Benton audience basically gets a state championship crew every Friday night,” says Jim.

With three high definition cameras, graphics, and instant replays, the crowd’s experience is near “ESPN level,” said Jim. “I love trying to capture the memories and the moments for these guys and their families. It’s a tremendous blessing in my life and I love bringing the game to families when they are out of town.”

As soon as Jim leaves the press box on Friday nights following the game, he begins prepping for the next week’s game. Benton’s Head Coach Brad Harris provides access to games online. From the links, Jim watches the footage and memorizes the opposing team’s numbers, positions and names. The prep is an important component for Jim who dedicates close to 25 hours a week prepping for the next game. “We don’t just want to call a young man on the opposing team by his number but also by his name,” explains Jim. “We want to be prepared for the Panthers and the opposing team so that all the kids are recognized in a professional and respectful way.”

Coach Harris and Jim also meet on a weekly basis discussing the team’s strategy and their expectations for the week. “Coach Harris is our best asset when it comes to football strategy and what to be watching for in the game. We can be prepared and not caught off guard by certain situations that play out during the game.”

For Jim, Benton football holds a wealth of joy and memories. Jim’s Uncle Gerald Gardener was the head coach of the Benton Panthers from 1969 to 1971. Gerald was inducted into the wall of fame with the Benton Athletic Memorial Museum in 1996.

Jim’s favorite moments over the last ten years include being a part of the broadcast team at the first game in the new stadium in 2013, the Panthers 6A conference championship win against Pine Bluff in 2014, and beating Jonesboro in 2016.

As for announcing the Salt Bowl each year, Jim says, “It’s like getting to do a college game!”

With a focus on the upcoming season, Jim is looking forward to calling home games from the newly dedicated Jim Landers Press Box. “Jim Landers was the voice of the Panthers for a number of years and he gave me the opportunity to get started in this. All of us who are a part of the broadcast crew now owe a debt to him for being a pioneer in the Benton broadcast community,” explains Jim.

As for this year, Jim Gardner believes Benton has a lot to look forward to. “I’m excited for the upcoming football season,” he says. “We have one of the better offensive lines we’ve had in a while. They will likely lead our team this year. We also have a great sophomore class coming in and I’m excited to see what they contribute. Benton football has been on an upswing. The ten years I’ve been able to be a part of this have been some of the best years in their history. I’m looking forward to seeing how this team builds on the momentum of the last ten.”

“There are people who can do this job better, but no one would love it more,” said Jim.  “I hope to keep doing it as long as they let me. When the day comes and they find someone else, I’ll be the biggest fan in the stands.”