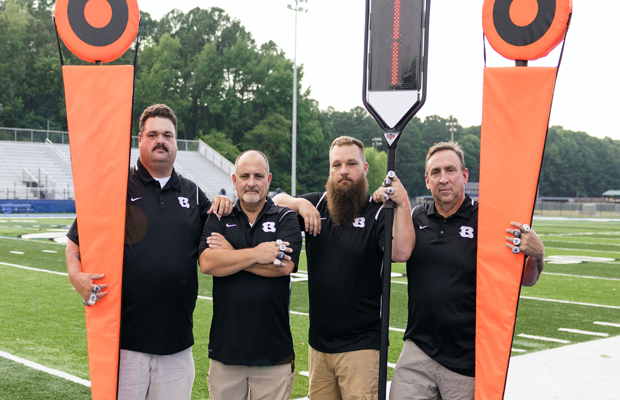 A “chain gang,” in the traditional use of the slang, is not something anyone would choose to be a part of. But for the group of men on the Bryant Hornet chain gang, it is a very different story. The crew, comprised of Greg Diamond, Jimmy Diamond, Darren Evans, Pat Blakley, and back-up members Mike Blakley, Ethan Blakley and Brad Rice, have a combined tenure of over 80 years of measuring and marking the downs for the four-time state championship team.

Greg Diamond, whose “other” job is a property catastrophe adjuster for Farmers Insurance, is a 21-year crew veteran. Jimmy Diamond (19-year member) works for the maintenance department for the Bryant School District, which allows him more face-to-face time with the coaches and players on the team. Darren Evans (8 years of service) is a Construction Project Manager for UAMS, and Pat Blakley is the owner of Bryant-based Bin There Dump That. He is also the member who has served the longest, with 28 years under his belt.

The group operates on a volunteer basis week after week, while maneuvering life’s hectic pace to ensure that there is always an experienced crew of four to five on hand at every game.

The chain gang is vitally important to the flow of the game, and this Bryant Hornet squad has developed a reputation for efficiency and precision in their task, so much so that they have been asked to pull the chains in college games at War Memorial Stadium. “Our responsibilities include displaying the down marker, running the down chains and moving the run clip,” Greg explains. The men take their job seriously and use their own set of equipment because they know it has been well maintained and is in pristine condition.

Although crew members receive no pay, each has his own incentive for continuing to work the gridiron. Jimmy, who learned how to run the chains after a junior high football injury prevented him from ever playing again, said, “I love the Hornets, and it means so much being a part of the community. It’s a constant rush and I have a great time watching the action.” Jimmy pledges to remain on the chain gang until he is “asked to stop” or the current team breaks up, because he would not want to do the job with any other group—a testament to the loyalty and cohesion the gang enjoys.

Pat, who got involved when his kids were in elementary school at Bryant and the Hornets needed someone to serve, says his wife told him he was going to stop working the games ten years ago, but he is still going strong and will continue as long as he lives in Saline County. “We get a free meal each game,” jokes Pat, but in all seriousness, he loves the Bryant community and knows that the coaches and athletic director depend on them. “Bryant athletics is an important part of the community and I enjoy the camaraderie with everyone.”

Greg got involved through a former co-worker and fellow ten-year chain gang veteran, Bill Koasis, who has since passed away. “I have been a Bryant Hornet from day one. I love the excitement and I always have the best seat in the house.” Each member of the chain gang has received rings for each of the Hornet State Championships, 2018, 2019, 2020, and 2021, which Greg proudly keeps in a display case in his home.

Darren got his chance to be on the chain crew when he filled in for someone who was sick. “At the time, I had all three of my daughters at Bryant High School, so I jumped at the chance to do this. It’s something I always wanted to do.” Pulling the chains is fun, and for Darren it “gets his adrenaline going.” “You feel like you are a part of the game, especially when you are mid-field and the opposing team has you surrounded and everyone is screaming and cheering, and the band is playing. That is why I volunteer and don’t think twice about it.”

With so much time spent on the sidelines watching one of Arkansas’s best football teams, the crew has enjoyed some memorable games and unforgettable experiences. Pat recalls the first Bryant state championship as a game he’ll never forget, as well as the year the Hornets beat the Fayetteville “powerhouse” team in the play-offs.

Jimmy remembers in 2019 when North Little Rock beat the Hornets the first time they played, but Bryant came back to beat them in the state championship. “The defense dominated that game and really made the difference.” Darren’s most memorable game featured exceptional weather conditions. “It was raining so hard you could barely see anything, but they kept playing and it was actually a lot of fun. I remember looking back at the game and thinking to myself, ‘Man, you must be crazy,’ but the whole time I had a smile on my face and I was glad I was there.”

They all agree that the 2022 Bryant Hornet team plays well together and has the mojo needed to go all the way. “Coach James has taken the team to a whole new level through his discipline, access to state-of the-art facilities, and community support.” Because the Bryant Hornets are such a strong and advanced high school team, they are often invited to play out-of-state high school teams to increase the experience and competitiveness of those teams. Also, nationally ranked teams like the Bryant Hornets (Top 50 for the years 2018-2021 and Top 15 in 2019) want to play each other to get stronger and build credibility in the sport.

Although all Hornet games are exciting, the chain gang looks forward to the annual Salt Bowl with special enthusiasm. “The atmosphere at all Bryant games, and the Salt Bowl in particular, is electric and full of energy.”

Pat was quick to add that all Hornet extracurricular activities are like that, including cheer, band, basketball, and baseball. “Our school organizations are top-notch because there is so much community support. It’s not just about the money; it’s about commitment and pride. People make the difference.”