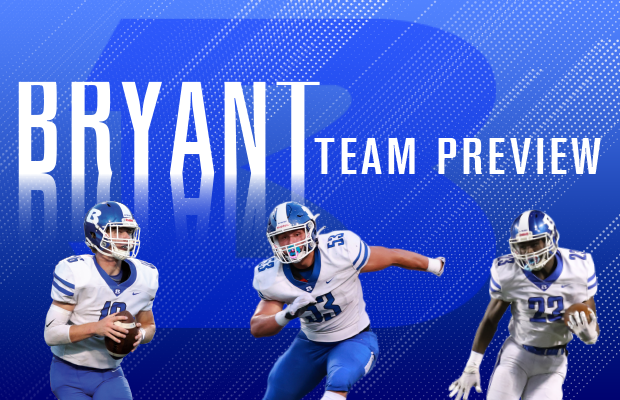 The past four years, Bryant’s football season has begun with a big game at Little Rock’s War Memorial Stadium and ended there about three months later in the state championship game.

The Hornets won the program’s first state title in 2018, and late in that season was the last time they lost to an in-state opponent. Three more 7A titles have followed and all of those runs began with dominating wins in the season opener against bitter rival Benton in the Salt Bowl game at the iconic stadium in Pulaski County. Bryant won 42-3 last season and hasn’t lost to Benton since 2005.

“We coined the phrase ‘Finish where we started,’” Bryant head coach Buck James said. “The Salt Bowl is a big game, and it is a home-field advantage for us playing there. We play in team camps all summer there, and then play our first game there. We’ve played our last game there the past four years, and that has been a good tradition—a good battle cry. This is something we can hang our hat on. That is our goal again this year.”

Carson Burnett developed into a solid quarterback in his only year as a varsity starter sitting behind star Austin Ledbetter, who graduated as a three-time state champion.

Junior Gideon Motes (6-2, 195), who missed part of last season with a hand injury, is very similar to Ledbetter down to his commitment to the University of Arkansas baseball team. “He’s the most experienced quarterback we have, from the standpoint he’s been playing it since junior high up into high school,” James said.

Senior Tyler Pinney (5-10, 165 ) has been a backup that uses speed and shiftiness to his advantage in special packages. Pinney may also see snaps at wide receiver and “is a big cog on special teams.”

Sophomore Jordan Walker (6-1, 215) led the junior high to an undefeated record last fall and has impressed the coaching staff with his stature and strong arm. Classmate Ridge Sutherland (6-3, 215) also “possesses a strong arm” that has been on display this summer during 7-on-7 tournaments.

Senior running back Chris Gannaway (5-11, 185) enjoyed a breakout season and rushed for 1,288 yards and 12 touchdowns a year ago. He also caught 12 passes for 170 yards and 2 touchdowns and now “has a chance to be the best running back in the state.”

Junior James Martin (5-8, 180), who has 4.5 speed, ran for 421 yards and 9 TDs in his varsity debut last fall. The running back room was already potent but got an unexpected boost when Benton transfer Brandon Johnson (5-8 180) transferred to Bryant in the offseason. Johnson, who started his varsity career in Dumas, ran for nearly 1,000 yards for the Panthers last fall.

“We can go four or five deep with some younger kids, and this is the best running back corps I’ve had in my entire coaching career,” James said.

Junior receiver Mytorian Singleton (5-10, 185) eventually became Burnett’s favorite target. He finished the season with 64 catches for 1,150 yards and 9 touchdowns as a sophomore.

Senior Matthew Elder (5-10, 265) is the only returning starter from one of the better line groups in school history. Elder, who started the final five games of the season, is versatile enough to also play guard and worked at that position frequently in the spring, James said. Classmate Lawson Hutchins (6-5, 280) saw significant snaps last season in ‘heavy packages’ and started a few games. “Elder and Hutchins will anchor the line,” James said.

Junior Tate Settle (6-2, 285) can also play multiple positions on the line and will help create depth with his versatility, James said.

Senior kicker Steven Fuller (5-11, 190) is a three-year letterman and has been reliable, but sophomore Jackson Cook (5-9, 140) “is talented” and could push for playing time, James said.

Senior Ivory Gilmore (6-1, 230) started in the state championship game and caused a key fumble late in the game.

Junior defensive end TJ Lindsey (6-5, 260) made a splash in his varsity debut last season and after receiving major Division I offers is considered one of the top defensive linemen in the state.

Senior tackle Blake Abney (5-11,240) impresses James with “size and strength” and classmate Josh Moore (6-2, 200) contributed last season but looks for even more playing time after a productive offseason. Seniors Jeremiah Smith (6-0, 260) and Zylin Hildreth (5-9, 230) add depth inside, and junior Nick Biskey (6-4, 240) started at defensive end in the Salt Bowl last fall and then rotated the rest of the season and seeks an expanded role this season.

Two-year starter Jaylon Brown (6-2, 190) anchors a veteran linebacking group patrolling the outside. Senior Will Cornelieus (5-10, 185) joins Brown as a returning starter on the outside. Classmate Traylon Russ (5-10, 170) can play both linebacker spots or the secondary with his ability to cover and tackle.