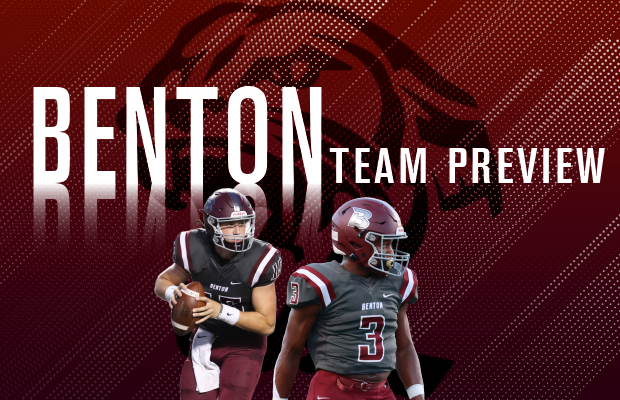 Last season Harris received an unexpected boost to his team when Monticello transfer quarterback Stran Smith showed up in July and became one of the better signal callers regardless of class.

Senior Jack Woolbright (5-9, 155) was expected to start under center but with Smith’s emergence started in the secondary. Now in his final varsity season, Woolbright, who also plays baseball, is in the middle of a heated battle for the starting QB job.

Juniors Cline Hooten (6-3, 190) and Hudson Chandler (6-0, 220) split JV snaps a season ago. Harris lauds Hooten’s offseason work ethic with his devotion to get bigger, faster, and more mechanically sound. The coach said Chandler “throws the ball as well as anyone” but needs to improve his footwork.

Gary Rideout (6-0, 170), a junior transfer from Little Rock, is also in the quarterback mix and being evaluated as a defensive back, Harris said.

“There is still no clear-cut guy separating himself this summer,” Harris said. “This is a battle that is going to go into August.”

Junior University of Arkansas running back pledge Braylen Russell (6-2, 225) officially transferred from Hot Springs Lakeside to Benton June 6. He was one of the top sophomores regardless of class last season.

Junior Chris Bernard (5-10, 190) started in the secondary as a sophomore. He moved to running back in the spring where he was penciled in before Russell’s arrival. Bernard has 4.5 speed and is a standout sprinter on the track team.

Also, junior Kyron Wells (5-8, 195) will see snaps in the backfield adding to explosiveness with his “bowling-ball” frame.

Senior receiver Donovan Pearson (5-9, 195) will line up in the backfield but will primarily be used as a slot receiver. He is the team’s leading returning receiver with 51 catches for 763 yards and 8 touchdowns last fall.

Senior Logan Owen (5-11, 170) battled a shoulder injury last fall but impressed in the offseason. Junior Colby Howard (6-1, 165) ran the hurdle events in the spring and Harris expects him to “make a push” for playing time this fall.

Harris said sophomore Elias Payne (5-8, 155) is “the fastest player” on the team and expects some big plays from him in his varsity debut season.

Senior Walker Davis (6-4, 285) is one of the top offensive linemen in the state and committed to Arkansas State in June. He can play any position on the line but will probably fill in at left guard or tackle spot.

Senior Karter Sanders (6-0, 260) started at center at 235 pounds last fall but was committed to packing on more muscle in the offseason and gained another 25 pounds, which will help him this fall.

Senior Elijah Harris (5-10, 250) added 20 pounds to his frame after “he found out he was getting thrown around a little bit” playing significant snaps last fall. He worked hard in the weight room in the offseason and increased his squat to 550 pounds, and the result was more physical play in the spring.

Senior Connor Morgan (6-0, 265) looks for a starting spot after seeing two starts last year and rotating the rest of the season. He bench presses over 300 pounds and features a 275-pound power clean and 500-pound squat.

Junior Tanner Holden (6-0, 265) was yet another of the undersized linemen who reported to spring workouts bigger and stronger after suffering a leg injury last season. He too is bench pressing over 300 and has recorded best squats and power cleans that check in over 500 and 275 pounds.

Senior soccer player Lucas Wilbur (5-10, 145) was steady last season booting 6-of-7 field goals with a long of 38 and hitting 55-of-58 extra-points. He also showed a knack for placing kickoffs, Harris said.

Senior Hunter Goodwin (6-1, 250) is a two-year letter winner and returning starter at defensive end. Goodwin was clocked at 4.86 in the 40-yard dash at the Harding University combine this summer and bench presses 335 pounds and power cleans 295 pounds.

Junior Cal Constantine (6-1, 245) has emerged as a top candidate at nose guard. Senior Jaquese Capel (5-11, 225) is pushing for snaps at nose guard after seeing most of his time on the JV squad last fall. Junior Jordan Burr (5-9, 225) can help at nose guard or defensive end, Harris said.

Juniors Peyton McNeely (6-2, 230) and Chase Harding (5-11, 235) made major impacts on the defensive line last season due to glut of talent at linebacker but may make the move this season.

McNeely ran a 4.61 40-yard dash time at the University of Memphis earlier this summer. Harding (4.8 speed) “isn’t quite as fast as [McNeely] but has great instincts.”

University of Central Arkansas baseball commit Jake Jones (5-10, 210) “takes a linebacker mentality with him out on the mound and will hit you on the football field.”

Senior cornerback Perverious Perkins (6-0, 155) “had a good summer in seven-on-seven tournaments” and is gunning for a starting spot.

Diminutive junior cornerback Jayveon Parker (5-5, 135) can stand underneath a basketball hoop and dunk according to Harris and is also the reigning two-time weight meet champ at 132 pounds. Parker (4.5 speed) deceives taller receivers who think they can pick on him.

Julius Stinson (5-8, 150), who can also play receiver, has impressed in the offseason and this summer. Woolbright will play cornerback if he doesn’t win the quarterback job.

Bernard “has a chance to be special” at safety and already has interest from NCAA Division II programs. Senior safety Patrick Shipp (5-11, 155) saw significant playing time last year and is seeking more snaps.

Senior Daniel Lunsford (6-1, 165) can play either safety spot. Classmate Bentley Stamper (5-9, 155), who fractured a bone in his leg in the spring, is looking for more time at the weak safety position after rotating last fall.