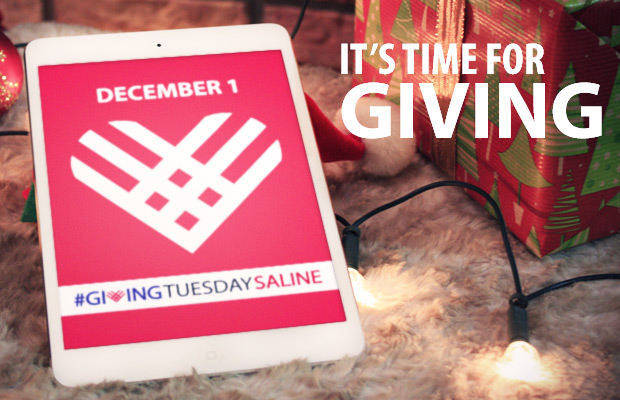 ‘Tis the season for long lines at all major retail stores, hectic traffic that will make the average holiday shopper question whether they are in central Arkansas or in New York City during rush hour, and extra spending that puts a strain on the pocket book. In Saline County, ‘tis also the season for giving to those less fortunate through assisting local non-profit organizations with the help of a global event that is rapidly spreading across the country.

#GivingTuesday is beginning its fourth year and is a day of giving fueled by the power of social media and collaboration from several different entities. #GivingTuesdaySaline is a local, combined effort between ten non-profit organizations in the area that share a common goal of raising awareness of the national #GivingTuesday movement.

“Our hope is to advance the efforts and generate support of the organizations and those they serve,” Megan Caldwell, Community Service Coordinator for Saline Memorial Hospital, said.

#GivingTuesday is observed on the Tuesday after Thanksgiving, after the annual shopping events commonly known as Black Friday and Cyber Monday. The event was created in 2012 by 92nd Street Y, a cultural center in New York City that since 1874 has been bringing people together around the values of service and giving back. The idea is to connect diverse groups of individual people, communities, and organizations around the world for one common goal: to celebrate and encourage giving.

Currently, #GivingTuesday has 30,000 plus partners in 68 countries around the world including small businesses, non-profits, government agencies and major corporations. Since the inauguration of #GivingTuesday, there have been 32.7 million Twitter impressions and 750,000 hashtag mentions of the movement.

“#GivingTuesday 2014 contributed funds to our program that allowed us to recruit, train and supervise an additional 21 community volunteers in 2015 which in turn allowed us to increase the number of abused, neglected & dependent children we serve by 60%,” Jennifer Harklau, Executive Director of CASA of Saline County said.

An event will be held on #GivingTuesday, December 1, 2015, at the Best Buy in Bryant from 11 a.m. – 7 p.m. to give local residents an opportunity to become more aware of the non-profit organizations in the area. There will be free hamburgers and hot dogs for lunch, pictures with Santa, and a DJ present.

“We are inviting people to come out so we can tell them about what we do and how we support our community. It is a great feeling to serve alongside these great organizations in our community. And it is very encouraging to see our community become so active in supporting those we serve. #GivingTuesdaySaline is a great way to learn about the resources available in Saline County and support them through giving,” Matt Brumley, Foundation Director of Saline Memorial Hospital said.

This Christmas season, be challenged to not just spend money on the deals and steals that you sacrifice sleep and sanity for but also give back to your local community by donating on #GivingTuesday to a non-profit of your choice. Giving of your time, talent, and resources will go to help make a difference in the lives of individuals and families in your own backyard and around the world. Help spread the word by tweeting and posting with the hashtags #GivingTuesday and #GivingTuesdaySaline. To learn more about the #GivingTuesdaySaline initiative, please call 501-249 2319 or find us on Facebook, Twitter,
and Instagram.