Home / Notable / A Heart Against Hunger

A Heart Against Hunger 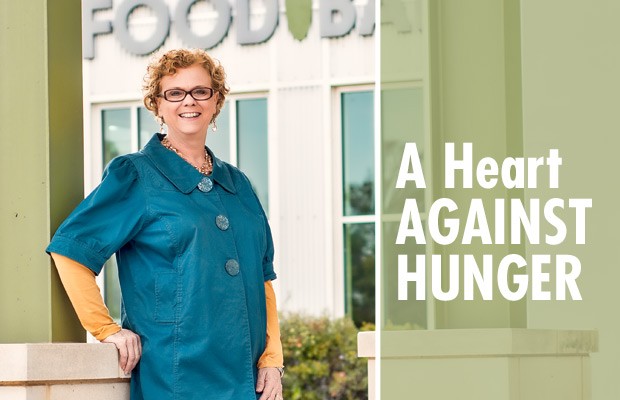 The holiday season is a special time of year, meant to be spent in the company of family and loved ones. For many, it’s an eight-week marathon where we’re flooded with constant reminders of comfort, joy and good will toward all.

This season, though, there is something else we might want to consider while preparing for the holidays: One in five Arkansans don’t know from where their next meal will come. What’s worse? More than one in four are children, and our state has the highest number of seniors in the nation struggling with hunger.

“Data consistently shows Arkansas to be among the highest in America for food insecurity,” said Rhonda Sanders, CEO of the Arkansas Foodbank. “The most difficult thing to do, that we face, is to convince Arkansans that there are people around who don’t have access to the food they need.”

But those numbers do bear out, and Sanders, who took over as Chief Executive of the Foodbank in May of 2013, has spent much of her life in a battle to help put food in the hands of those who need it most.

Prior to joining the Foodbank, Sanders worked with the Health Department, Arkansas Advocates for Children and Families, and the Arkansas Hunger Relief Alliance. , The daughter of a Baptist preacher, she’s spent much of her adult life advocating for those who are food insecure.

“Food insecurity really isn’t simple. It can come from a personal disaster like a home burning or a flood,” she said. “It could be from illness; possibly the bread winner becoming sick and being unable to work. It could be the result of the economy, a job being cut, or lost hours at work. The circumstances vary from family to family.”

The Arkansas Foodbank was established in 1984 to serve those in need of critical healthy food. Today, the organization has grown to partner with 300 local agencies and deliver more than 20 million pounds of food each year. According to a study from Hunger in America, the Foodbank today serves 280,000 Arkansans statewide.

“We know we can’t fix everything, but if we can help provide food, then we’ve done our jobs,” Sanders said.

In addition to her service now leading the Foodbank, Sanders also maintains close ties with Saline County, living in Bryant and serving on the School Board for close to a decade.

“I’ve always believed education is the key to bettering your life,” she said. “Both of my children attended Bryant Schools, K-12, and I first got involved as a parent through PTO. Now, I’ve been on the school board for eight years because I realized this is a way I can give back to the community and make sure more children have a quality education and have the opportunity go get good jobs.”

Combining her responsibilities as the head of the Arkansas Foodbank and as a member of the Bryant School Board has only further exposed Sanders to the realities of childhood hunger.

Obviously, that battle is a top priority within the Foodbank. However, Sanders is also aware of what educators are doing each day in their schools to get a good meal to their students.

“Every one of the teachers here in Saline County and in the state will tell you that they see those faces,” she said. “They know when their child is acting out or not performing to their best, hunger is probably the reason.”

She has also heard from teachers that many of them will keep extra food in their desks so they can feed students and keep them in the classroom learning.

“Several Bryant schools are doing breakfast in the classroom just to get as many children as possible eating. They know about those students who may end up getting angry or starting a fight, maybe laying their head down on the desk, because of frustrations over hunger.

“[The students] go home in the afternoons, not knowing what’s in their pantry,” she added. “For many, the meal they get at school may be the best they get all day.”

Another often overlooked group struggling with adequate food that Sanders says is equally heartbreaking is among students attending colleges and universities.

“There is a large number of students going hungry on our college campuses,” she said. “One of those students has come to work for me at the Foodbank, and he helped start a food pantry at the University of Arkansas. When I hear the stories he shares, I want to cry. At all of the universities [in Arkansas], parents may not be able to cover all expenses, and these students are working so hard on their educations. They may just need a little help, but there’s not enough money to go around.”

The battle against hunger is clearly a year-round fight, but Sanders admits the holiday season can be incredibly challenging for families already struggling to make ends meet.

“This is an especially hard time of the year on our seniors and on a lot of our families,” she said. “It’s the time when a low income family may not have a lot to give or provide for their children.”

And that is where the continued kindness and generosity of Arkansans steps to the forefront as Sanders highlights the numerous fundraisers and food drives planned by local groups scheduled for the coming months.

“We have so many food drives going on during the holidays. It truly is amazing,” she said. “Businesses, families, and communities all come together – often on their own – just to help. We have our telethon scheduled for December 11 to help raise money, and the Arkansas Symphony Orchestra will hold its turkey drive again this year.”

It’s an outpouring of support and community that Sanders says is overwhelming, but it’s the individual donations that almost bring her to tears.

“Most of our donations come from normal people,” she said. “They’re small donations, but everyone pitching in is what makes the difference. With every letter we receive and the donations sent, the ones that will always make me cry are the letters from elderly people who say they wish they could send more,” she added. “The letter will say something like, ‘I’m enclosing $5 because it’s all I have. I wish I had more, but I just don’t.’ They feel bad because it’s all they can give.”

To consider making a donation to the Arkansas Foodbank, visit www.arkansasfoodbank.org or call 501-565-8121.