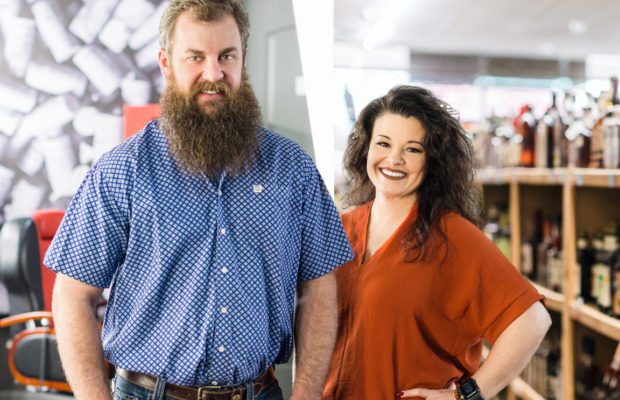 Hometown, local, family man and entrepreneur are a few words that come to mind when you think of Carl West, but most just simply know him as “Bodiddle.”

For more than a century, the Green family name has been synonymous with business in Benton. From manufacturing, retail, and commercial development, the West’s have been instrumental in the city’s and Saline County’s growth since arriving in Central Arkansas in the mid-19th Century.

“We have been here since the Chisholm Trail came through,” said Carl West. “My grandfather had sawmills, gas stations and a liquor store here back in the 1920’s. At one of his first locations, he started putting milk and bread on the shelves, creating the first convenience store of its kind in the area and was located where the Big Red now sits.”

The family still calls Saline County home, and Carl West carries on his family’s legacy. As a board member of the Benton Chamber of Commerce and the owner of both Bodiddle’s Wine & Spirits and Bodiddle’s Barber at 1611, you could say entrepreneurship and commitment to community are in his blood.

“I’ve been here my whole life, and honestly, I can’t remember not working,” he said. “I’ve been mowing lawns since I was 12. I also remember helping with home remodeling when I was a kid, and I’m still involved with that today.

“If you can make a dollar doing it, odds are I’d try it,” he added.

Opening his own liquor store in January 2017, “it was a pretty nerve-racking time” he stated. “I started with a soft opening in 2016, just a few months before officially opening the store in order to get a feel for how things might go in the beginning.

Keeping things in the family, as Carl is wont to do, he opened Bodiddle’s Wine & Spirits in the former Bass Pro Shop location at 1611 Military Road, a building his family constructed on in 1978.

“We certainly didn’t start off as the biggest store in town” he said. “It was difficult to get full cases of products for the shelves, but we kept pushing forward. Today, we carry a large selection of brands and products.”

With business doing well at Bodiddle’s, West began looking for his next opportunity a few years later. With longtime staple Young’s Jewelers flanking the liquor store as a tenant to one side, a vacant space in the building set West’s mind to wandering.

“I was thinking about opening a bar there,” he said. “It wasn’t going to be a traditional bar, but instead, a spot where someone could come and hang out, maybe work remotely, if they wanted.”

After pursuing a few ideas that didn’t seem to be the correct fit, West got a suggestion from Shelley Platt, a local business owner of Rumors Hair Design in Benton.

West and Platt began to trade business ideas during his visits to the salon. “When he’d come in to get his hair cut, we’d often discuss business opportunities and soon determined we had a very similar approach to business.” she said. “Carl had a friend who was trying to open a barber shop,” she added. “I suggested he open the barber shop in his vacant space

Always open to a good idea, West didn’t immediately say, “no.” He knew his strength was marketing and promotion, while Shelley’s strength was the salon business.

“Shelley, having a successful salon business since its opening in 2006”, I told her, “I don’t know anything about running a barber shop” but she assured me we could make it work.”

From there, the second location in the Bodiddle’s empire was born with the Barber Shop at 1611, located next to the Wine & Spirits store. While the business’ name still reads, “Barber Shop,” both West and Platt admit the offerings have expanded well beyond men’s hair care needs and now include offerings for women, too.

“It’s hard to get in to see Shelley. She’s booked for the entire year,” West said. “We want our customers to be so happy with the services we offer that they’ll see us as their “go to” business from their first visit and for more in years to come.” West and Platt both agree, “It’s about the relationships we form along the way”

West and Platt also highly value another key customer group: the men and women charged with keeping us safe each day.

“I place a real priority on military service members, EMS, police and firefighters,” West said. “Some don’t really understand all the sacrifices made by our first responders and military and how hard they work protecting the public, so if these men and women shop with us, we try to make sure they know how much they matter.”