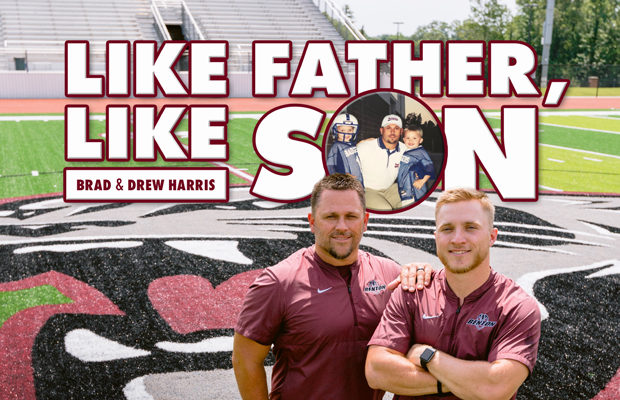 “Drew and his brother grew up in a high school field house,” Benton Head Coach Brad Harris said. “He was drawing plays on marker boards by five- or six-years-old, and he had no problem telling everyone he was going to be a coach one day.”

A transfer to Benton his senior season, Drew was a multi-purpose offensive threat on the football field and a standout shortstop/pitcher for the state final baseball team. He went on to earn numerous Conference and State honors in both sports, including 6A Male Athlete of the Year from AR High School Prep.

For Brad, his role had changed, though. A former head coach at Lincoln High School, he joined Scott Neathery’s staff as an assistant coach in 2014, and for the first time, would not be directly coaching his son. “He has always played for me,” said Brad Harris. “I wasn’t his position coach for that season, and I got to see him mature and grow as a player and as a young man from a different perspective. It was special to be a part of that.”

Drew went on to play at Ouachita Baptist University, earning conference honors multiple seasons and being named a NCAA Division II All-American. Still, he never lost sight of the path he envisioned more than a dozen years ago.

“Going back to when I was a ball boy on my dad’s teams, coaching is really all I’ve ever wanted to do,” Drew said. “Dad laid that foundation for me, and I’ve seen the positive impact he’s had on so many lives and communities. It was the example for me, and it’s what I want to do.”

But just being a coach like his dad wasn’t the only thing Drew Harris always dreamed of. He also wanted the chance to coach with his dad.

“Out of college, he was eager that a spot might open at Benton,” Brad Harris said. “I tried to get him relax about that and said, ‘Try going somewhere else to start. I’m not going anywhere anytime soon. Just let it happen naturally.’”

With the encouragement of his father and OBU coaches, Drew earned a job in 2019 as an assistant high school and junior high football coach at Little Rock Christian under 20-year veteran head coach Eric Cohu. Drew also worked as an assistant baseball coach.

“To me, this was exactly what he needed,” Brad said. “Coaching there gave him the chance to see how another staff operated, and with Coach Cohu, you couldn’t ask for a better leader. He does a tremendous job with his program.”

“The biggest thing I learned in that first year was the importance of establishing strong relationships with the kids,” Drew said. “Going into coaching, it wasn’t always the first thing I thought about as being a big deal, but as I began working with the players there, I realized that if I wanted them to succeed, I had to develop those relationships to encourage them to be better.”

What neither realized until Brad’s wife, Megan, reminded them was that the Panthers opened their 2019 season at home with a scrimmage game against Little Rock Christian. “It was just a few weeks before the season when she turned to me and said, ‘Oh my gosh. You two are going to coach against each other in his first game,’” Brad said with a laugh. “I answered, ‘Yep. And we’re not father and son. We’re enemies.’”

A year later, Brad got the news that one his assistants, 18-year veteran football and baseball coach, Rusty Davis, was leaving the staff and joining the school’s administration. That created an opening, and Drew immediately showed interest.

“All of our coaches knew him and have kept a strong relationship with him,” Brad said. “I thought it was a good hire and a perfect fit for exactly what we needed.”

For Drew, the new job means he’ll be calling himself a Benton Panther for the first time in seven years. More interestingly, the players he’ll now be coaching were elementary school students watching him from the bleachers during his standout senior season.

“I remember so many of those kids when they were in the 3rd, 4th and 5th grades,” Drew said. “It’s going to be exciting to be able to work with them now as their coach and help develop them as players and as young men.”

So what about nerves when it comes to coaching with your dad? Drew says, “No. I think he and I have developed a really good working relationship, and everyone, especially the players, can see how we work with one another.”

What does Brad think? “I’m excited to have him on staff and see what he can do with our young players. Many of them remember him, so he has instant credibility, and that’s going to be a lot of fun.”

And finally, what does Megan think? “I think she’ll be most happy to not have to split time driving back and forth between his games and mine,” Drew said.