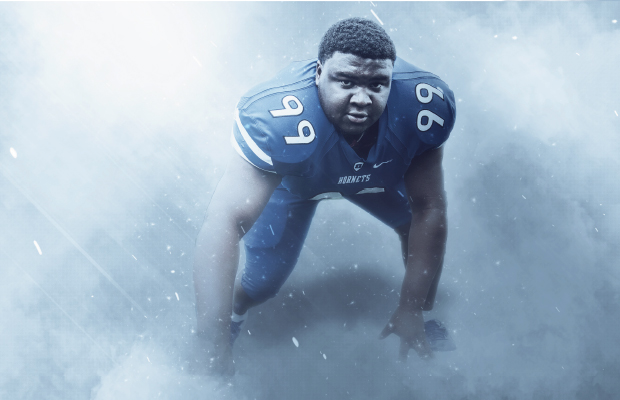 If you think about Bryant senior defensive lineman Robinson in terms of “football years,” he’s still just a baby. How so? Well, he’s only been playing the game with the Hornets for two years.

A former standout basketball player, Robinson turned his attentions to football for his sophomore year, and judging by how well he’s taking to this new challenge, it was a good decision.

“I love the atmosphere and the energy,” he said. “Bryant is known to be a baseball town, but when football season starts, everyone is there. All eyes are on you, and you have to perform to the best of your ability every play. I’m always up for that challenge.”

Joining the team shortly after the arrival of Head Coach Buck James, the 6’1”, 305-pound nose guard/defensive tackle almost immediately began turning heads. And he hasn’t really stopped doing so since.

“He’s a fantastic kid,” Coach James said. “He has all of the measurable talents you would want along with the “immeasurables” that make him fun to coach. He’s strong, fast and has a real talent for getting to the ball. He had a few interceptions his sophomore season, but he’s also one of the most honest and genuine young men I’ve ever been around.”

But Robinson isn’t alone on the defensive side of the ball for the Hornets. In fact, Coach James thinks this squad could have the best season since he and his staff took over. “Anytime you have a solid defensive front, it allows you to do a lot of things,” Coach James said. “Of course, it’s led by Kajuan and Josh Salgueiro, our two inside guys. Catrell Wallace and Austin Bailey are our two defensive ends. Those guys all started or played last year.”

“I think our football team is a lot better today than it was when we got here. Guys know their roles and that we expect them to step up and perform.”

In addition to being a leader on and off the field with his Hornet teammates, Robinson also makes it a point to be a solid role model to his three younger brothers and younger sister.

“My family means everything to me. Without them, I would have nothing,” he said. “I’m the oldest, and I try to lead by example and show them the hard work that goes into being an athlete, not just the idea of trying to be a superstar. They see me as a role model, and it’s a responsibility I really love.”

In fact, it was family and his mother’s love for them that brought the Robinson’s to Bryant from Luxora, a small town in Northeast Arkansas.

“My little brother was born in 2008 and was considered deaf,” Robinson said. “The only deaf school in Arkansas was in Little Rock. My mom and I decided it was time to move down here to help with him.”

Make no mistake, though. The miles of separation don’t hinder Robinson and his extended family. He says they all remain very close.

“I still have both of my parents, and the rest of my family is in Memphis, Jonesboro and Osceola. Even though we are all three hours apart, we still get together every chance we get. They all support me playing football, and even though they live (in Northeastern Arkansas), my family wears Bryant gear everywhere they go. It’s so crazy.”

And that strong family connection isn’t lost on Coach James and his Hornet coaching staff.

“Anytime you have a player who develops as fast and works as hard as Kajuan does, you know somewhere behind the scenes there’s a mom or a dad who is working just as hard to support the coach and the staff to make that player better,” James said. “I know it took a lot of trust from his mom to let Kajuan come out and do what he’s been able to do in such a short period of time. I know she’s been a real cornerstone in his development, especially off the field.”

Entering his senior season, Robinson says he’s committed to continuing his improvement on the field to achieve the team’s goals of a conference title and a run at the 7A Arkansas State Championship. All of that begins August 25 in front of 30,000 fans at The Salt Bowl from Little Rock’s War Memorial Stadium.

“It’s incredible to see the two communities come together,” he said. “Before playing football, I never really paid attention to (The Salt Bowl) because I was playing basketball. I didn’t see how it brought so many people together. It’s really special because I get to have my entire family come down to watch me play.”

Remember Coach James’ explanation of Robinson’s quick development on the field? That athleticism is now catching the attention of a number of Division-I and Division-II football programs, including UAPB, UCA, Southeast Missouri State, Louisiana Tech and Arkansas State.

“I felt pressure about that in the beginning,” Kajuan said. “Now, it’s just about going out and doing what I need to get better and go to the next level.”

It’s sure to be an exciting time for this young man who’s still learning the game. But you can rest assured that his coaches, his teammates and, yes, his family will be eagerly anticipating everything he stands to accomplish.