Home / Department / Play Is Its Own Reward

Play Is Its Own Reward 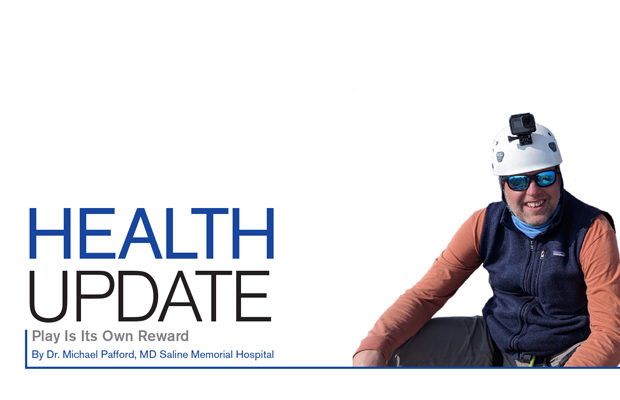 Those kinds of pictures don’t get taken, let alone make it to display, because those aren’t the essential activities in our life. Play, defined broadly as engaging in activity purely for enjoyment or recreation, takes center stage in our life even before we master the ability to walk as an infant. When we examine what it means to be healthy, we find that a central characteristic of healthy adults is play. So, what are the scientific foundations of play in a healthy lifestyle?

The medical literature regarding play is so broad that finding a starting point is a monumental task. Play is discussed in neurodevelopment as well as in neuropathology of addiction. Play is a focus of research in neuroendocrinology, but also in neuroanatomical remodeling after injury and nearly everywhere in between. But regardless of which branch of literature you examine, two recurring themes become apparent in research about play: neural plasticity and neurotransmitters.

Neurons also form the chain of connections that carry the initiation signal throughout the body to where that intention is expressed. Therefore, the interconnection of neurons is the essence of brain function. Neural plasticity encompasses the nervous system’s ability to form and reform connections between neurons. It was Aristotle that said, “The energy of the mind is the essence of life,” and without neural plasticity, there can be no energy of the mind. From a baby’s first cry after birth to a dying grandmother’s last breath, the nervous system constantly remakes itself, and play drives that remodeling.

When hamsters are isolated from social play, the structure of their neuron connections in the brain area named the prefrontal cortex is altered in such a way that they exhibit social defeat stress.  What this means in plain English is, if you prevent a young hamster from playing with his hamster friends, he quits and turns into a mentally unhealthy adult hamster. But further, the foundation of the unhealthy change is the anatomical structure of his brain! This is what is meant with phrases like “scarred for life.”

The other recurring theme mentioned above is neurotransmitters. Neurotransmitters are the brain chemicals neurons use at their connections to carry certain signals from one neuron to the next. It turns out that play stimulates production of many different neurotransmitters, and generation of neurotransmitters helps explain some of the benefits of play. For instance, a neuroscience group in 2011 found that laughter correlated with increased pain tolerance.

This matters because previous groups had demonstrated that pain tolerance equates to generation of endorphins within the brain, because endorphins do not cross in or out of the brain. Endorphin generation has long been held to help explain reported reductions in pain (Runners High) from athletes and people who exercise regularly.

Other forms of play generate endorphins as well as other positive neurotransmitters such as met-enkephalin and Insulin-like growth factor 1. Scientists in 2010 demonstrated that rough-and-tumble play generated ILGF-1 and that its production correlated with positive emotional states in rats.  They postulated that targeting ILGF-1 might provide a therapeutic intervention for depression and anxiety.

Finally, what about singing? Is singing a form of play? By our definition above, if you engage in singing purely for enjoyment or recreation then yes, singing is a form of play. Have you ever heard a bird singing so vigorously that you thought to yourself: “That little guy must be happy!”? There is evidence to suggest part of birdsong is driven by happiness!

Birdsong comes in different forms; most of it is directed singing (attracting a mate), but undirected singing is also recognized. Song directed at a mate receives clear positive reinforcement from obtaining a mate. But even undirected singing stimulates dopamine release in the reward centers of the birdbrain and is intrinsically reinforced by immediate release of opioids induced by the act of singing itself.  This means that for birds, their song is its own reward.

For us humans, play is its own reward. There is no doubt that continued play marks the healthy life. With spring around the corner, I encourage you to follow the birds’ lead. Get out and play!