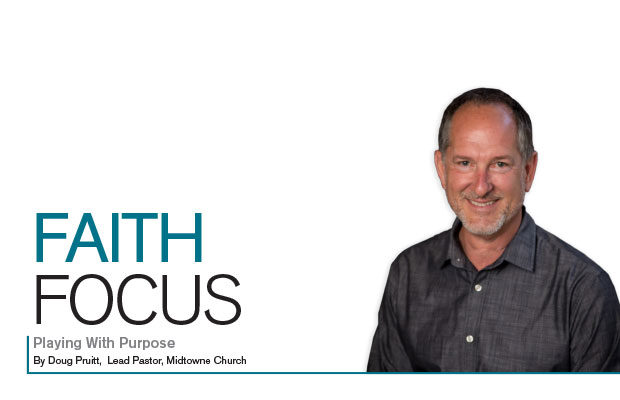 One of my favorite things about going to the movies, besides popcorn, is watching the coming attractions. I recently saw a preview for a new movie about football.

You can guess the plot. A coach with a strange past. A school with no team. A town with no hope. Yada, yada, yada, the team starts winning and inspires the town and even the whole country.

The thing that caught my attention about this movie, though, is that I had never heard this particular story. Growing up with a dad who was a football coach, I had heard many great football yarns. But this one had eluded me.

The movie is 12 Mighty Orphans. It’s based on a true story about an orphanage in Fort Worth, Texas, that did not have a football team—or even a football, for that matter. A coach comes to teach at the orphanage and organizes a team that eventually plays for a state championship.

As I thought about that movie, that coach, and that team, I began to understand an essential spiritual truth: God does some of His biggest and best work through people who are not first string. Instead, God uses people whom He equips and empowers and who are obedient.

The 12 Disciples that Jesus called were not part of the popular crowd. The woman He encountered at the well was an outcast in her town. King David was not the best physical specimen for the job. Rahab was a prostitute. The list goes on and on. God does not just use first string players to accomplish His purpose. He can and will use anyone who is available and acts in obedience by faith.

Remember, dear brothers and sisters, that few of you were wise in the world’s eyes or powerful or wealthy when God called you. Instead, God chose things the world considers foolish in order to shame those who think they are wise. And he chose things that are powerless to shame those who are powerful. God chose things despised by the world, things counted as nothing at all, and used them to bring to nothing what the world considers important. As a result, no one can ever boast in the presence of God.

1 Corinthians 1:26-29 NLT. Sometimes people think that because they are not on the first team, they are not making much of a difference. Our culture tends to make much of the few who appear to have things all together and have the most stuff. But the fact is, there are tons of people who are making a significant impact in the lives of others every day…and we will never hear about it.

It could be as simple as doing your job effectively so that your organization accomplishes its mission. It could be doing your best to be kind, courteous, and considerate toward the people you encounter each day. It could mean being the best mom or dad, husband or wife, son or daughter that you can be.

God uniquely designed you and placed you where you are so that you could be used to accomplish His purpose for His glory. You may not get any recognition for it from people. You may never make any highlight reels. You may never have a movie made about you. But God is fully aware of your faithful obedience to Him. And He will reward you in eternity and allow you to experience Him in a powerful and personal way in this life as well.

If you are a Christian, you have been adopted into God’s family through Jesus. You are God’s child. And if a washed-up football coach can take 12 orphans and build a championship football team, God can make you His champion, too.