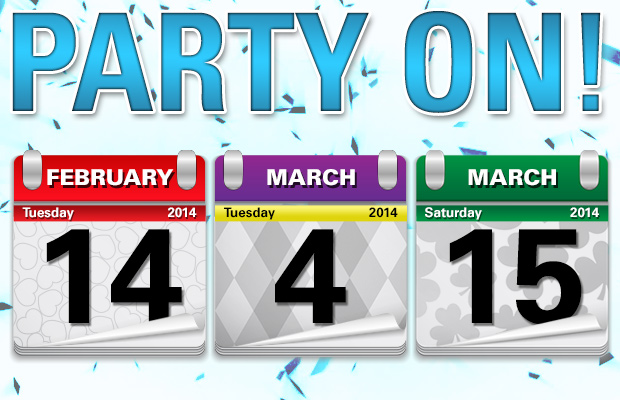 [tps_header]In 2013 our family hosted the first annual “Buckner Holiday Palooza,” and quite possibly the last. It started November 28 with Thanksgiving and ran every weekend through December 30. In total, we had 32 houseguests over the holidays. Whew! It was fun, but like most people, we were glad when the hustle and bustle of the holidays was over. Or so we thought.

Most people don’t stop to think about all the major holidays and events in the first quarter of every new year. There are plenty of the lesser known special days that cover everything under the sun, but there are some pretty significant holidays during the first quarter. So don’t lose that party spirit yet! Here are more reasons to continue the celebration into the new year.[/tps_header]

Valentine’s Day is the day dedicated to lovers. The origin of Valentine’s Day dates back to the third century when a Catholic priest named Valentine defied a law set by Emperor Claudius II banning marriage for young men because he believed that single men made better warriors than married men with families.

When Valentine’s actions were discovered, Claudius ordered his execution. Valentine eventually became one of the most popular saints in England and France. At the end of the 5th century Pope Gelasius officially declared February 14 Valentine’s Day.

A big part of Valentine’s Day is exchanging sentiments of love in form of cards and gifts. According to history.com, Americans began exchanging hand-made valentines in the early 1700s. In the 1840s, Esther A. Howland began selling the first mass-produced valentines in America and today an estimated 1 billion Valentine’s Day cards are sent each year. Other Valentine favorites include assorted chocolates in heart-shaped boxes and the standby of a dozen red roses—always a good choice.