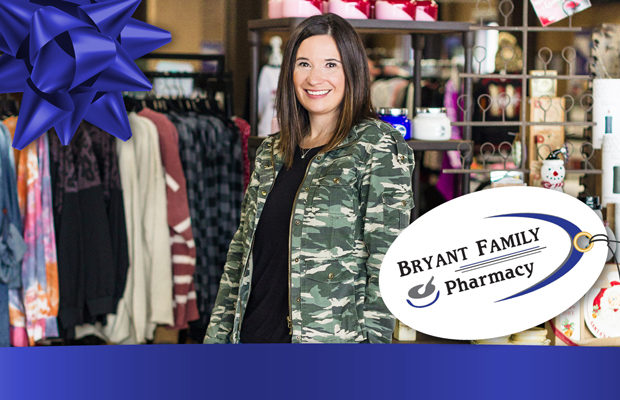 Bryant Family Pharmacy on Highway 5 is indeed a traditional pharmacy, praised in the community for its efficient service and unique clothing and gift items. The store owners, Jonathan and Bricin Martin, both Bryant natives, are quick to say that their business is all about people.

Their store mascot, the couple’s Portuguese water dog, Finn, is also a fixture in the community. “He is so well known by our customers—they absolutely love seeing him when they drive up,” said Bricin.

Bricin received her undergraduate degree from Arkansas State in Jonesboro, and went on to earn a Master’s degree from UAMS as a Nurse Practitioner. Jonathan also attended UAMS, where he received his Master’s degree in Pharmacy, and both settled back in Saline County, where Jonathan worked at the now-closed USA Drug location in Bryant. A few years later, the Bryant Family Pharmacy doors officially opened April 1, 2013, after many months of hard work, preparation and lots of prayer.

At that time, Bricin also went to work on the retail side, investing an initial $500 of their own money on inventory, just to see if there would be interest from customers. What they saw at the beginning was interest in clothing, which sold consistently. From there, Bricin branched out into gifts, home décor, accessories, and took her first trip to market. “At first our customers came in for the pharmacy run and made an impulse purchase. Then customers started coming in to shop.”

The Bryant Family Pharmacy has several must-have items for anyone on a holiday shopping list. According to Bricin, “Brumate insulated cups are a top seller, as is the Tyler Candle Company laundry detergent—it smells so good! Of course our biggest crowd favorite is the Capri Blue Volcano candle, of which we are the exclusive sellers in Saline County. We have something for everyone and can make the holiday extremely easy!”

As business owners, the Martins share that it is easy to find things to appreciate about the Saline County community. “We are always blown away by how this community makes a conscious effort to shop local and support small businesses.”

The Martins have attended Midtown Church in Benton for 13 years and believe wholeheartedly that their business came about because of a lot of prayer and a series of events orchestrated to allow them to open their doors. According to Bricin, “The whole story of how we came to own this business is such a God thing!”

Bryant Family Pharmacy proudly supports the local community, which includes the Boys & Girls Club of Bryant and Saline County, the C.A.L.L of Arkansas local chapter, Second Chance Youth Ranch, and sports teams and schools. “Really whatever we can do to help, we want to. If we get a request to support something, we make every effort to make it happen. It’s so important to give back to this community that has been so good to us.”