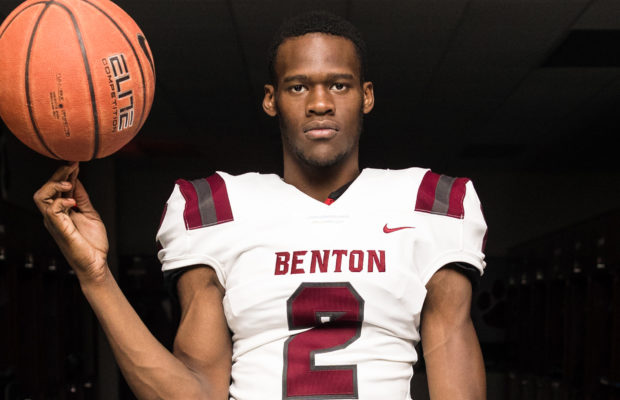 “Yeah,” he says while laughing. “She’s trying to pick between M&M Mini’s and another candy.”

Proper snacks are always critical, and when we caught up with Cameron, he was with his family at a local grocer, en route to a 17-and-under AAU basketball tournament in Alabama. “This will be one of the last chances we’ll have to be evaluated before football starts.”

That’s right. The Panthers are less than eight weeks from kicking off the 2021 season against Bryant in the Salt Bowl, and their standout wide receiver is still all-in as a starting guard for former Razorback Corliss Williamson and his Arkansas Hawks basketball team.

You see, Cameron is of two minds with both football and basketball and is regarded as one of the State’s best two-sports stars. But how does this cheerful, 6-3, 200 lb. standout keep everything straight?

“People ask me that a lot,” Cameron said. “Every day is schoolwork, but some days, it’s all football. Other days, it’s all basketball. And yeah, on a few days I do just need to rest.

“When I’m working on football, it’s more than just memorizing the playbook and thinking only about that,” he added. “I’m studying how the great players, those guys in the NFL, are running routes and creating separation and blocking against different coverages. Those are the things that will set me apart and give us a better chance to get the ‘W.’

“With basketball,” he added, “it’s exactly the same. I’m always studying and watching other players’ styles and approaches. I’m looking for ways to match my game to theirs and improve.”

In his 2020 football season, the work appeared to pay off. Cameron hauled in 56 catches for just more than 900 yards and 14 touchdowns. While the junior says his year could’ve been better, Benton Head Coach Brad Harris says Cameron’s skillset is simply different. In fact, it’s a talent he’s been watching grow for almost half a dozen years.

“I remember Cameron as a 5th and 6th grader,” he said. “He was skilled at such a young age, and you worry that type of attention might create too much pressure for a young player. As early as 8th grade, he had an exceptional season, and it was easy to get excited about the potential with this young man.”

The script for Cameron’s 2020 basketball season at Benton was similarly successful. He averaged 18 points, seven rebounds and five assists per game while also shooting just under 40% from three-point range. And like Brad Harris with football, Benton Panther head basketball coach Dexter Hendrix became familiar with Cameron at a young age.

“I think I first saw him when he was in the 6th grade,” he said. “What immediately struck me was his game and court awareness. He understood and was communicating the game to his teammates so much better than other players at that age.”

Hendrix calls Cameron’s athletic talents a “gift” but contends a different, ever-growing skill is what still sets him apart from his peers. “His basketball IQ is so unique. It’s up there with the best I’ve coached.

“By constantly studying the game, Cameron has an understanding of situations, clock management and whom and what we need to attack certain players, given where we are in the game,” he added. “The athleticism is undeniable, and when you combine that with his intelligence, you have something special.”

Cameron’s work at the high school and AAU levels has paid off and garnered attention from several college programs. According to the Arkansas Democrat-Gazette, he’s been offered scholarships from East Central Oklahoma, Oral Roberts University, and Texas A&M.

But not everything for Cameron has come easily. Two knee injuries in the 8th and 9th grades sidelined the two-sport standout for almost a full year. However, thanks to focus, rehab and the encouragement of his older brother, Fred, Jr., Cameron has returned to cap off his high school career on his terms.

“I still don’t always trust that my knee is going to hold up, but I’m getting there,” he said. “My brother Fred had a similar injury that affected his career, and he’s always staying on me to do the rehab and come back stronger and faster.”

As one of the more vocal leaders in the Panthers locker room, being “stronger and faster” is an attitude Cameron and his fellow seniors hope will serve as a foundation as they prep for the 2021 6A West season.

“I believe we have a great shot at the playoffs,” Cameron said. “We have a great offensive makeup and a defense to match it. I’m expecting big things from us this year.”

If you ask Coaches Harris and Hendrix which direction Cameron may go when the time comes to choose one sport in college, odds are you’ll get two different answers and valid reasons for why. But when you ask Cameron, he says he still has plenty of time.

“I’d like to play both in college, but that’s probably not going to be possible,” he says with a laugh. “I don’t know…one day I think it’s going to be football. The next, it’ll be basketball.”

Just chalk it up to another decision facing a young man who’s worked hard to earn that choice.