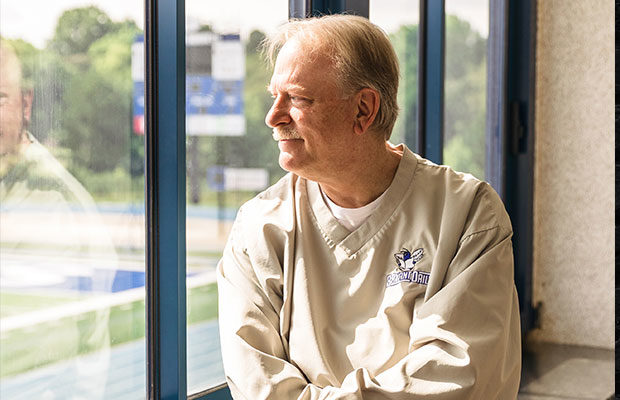 Humble. Quiet. Soft-spoken. Positive. Objective. Irreplaceable. One-of-a-kind. These are words used to describe the long-time voice of the Bryant Hornets, Rob Patrick. And while he has spent his sports writing career shining a light on others’ accomplishments, the time has come for the Saline County community to recognize, thank and say goodbye to this Bryant mainstay for the past 25 years as he moves on to the next chapter in his life in Fort Smith and embraces his role as a new grandparent.

Born in Fort Hood, Texas and raised in Fayetteville, Rob Patrick has made a career out of Arkansas sports. After graduating from Fayetteville High School and then from the University of Arkansas with a degree in English and Journalism, he obtained experience in radio as a programming director and disc jockey in Northwest Arkansas.

He and his wife, Jan, left Fayetteville for central Arkansas for her to pursue her career as an art teacher at Bryant High School, and Rob accepted the Sports Editor role at the Benton Courier. It was during his time at the Courier where he got to know, in his words, “a lot of Bryant coaches and parents, and became a fan of the program.”

About 15 years ago, Bryant’s Athletic Director, Tom Farmer, began working towards putting the Bryant football games on the radio, and reached out to Rob for on-air help with the broadcasts. According to Rob, “My thought was that I’ll be at the games anyway, so why not put my years of radio experience to good use?” And that began Rob’s run as the unofficial ‘Voice of the Bryant Hornets.’

Rob later left the Benton Courier for a weekly newspaper where he covered sports in Bryant, then decided to start a website devoted solely to Bryant Hornets athletics, and the BryantDaily began in February 2008. It quickly became a lead resource for many for all topics related to Bryant sports, until this summer, when Rob made the decision to retire.

When asked about his proudest moment as a Hornets fan, Rob said, “I am at the games to observe, be objective, write about the event and also root for the team. I make no pretense about being objective. I have also remained aware of the need to be positive with my sports writing.”

When asked which sport he preferred to cover over the years, he laughed and said “I always love the in-season sport.”

Rob’s greatest memory as a Hornet is also a hard question for him to answer. After a thoughtful pause in the conversation, Rob said, “There was a really interesting situation in 1999 for the annual Benton-Bryant football game. Benton was the bigger school, and Bryant had consecutive losing seasons. But there was a turning point that year at C.W. Lewis Stadium. The Benton-Bryant game that year was a showdown, and the stadium was too full. There were people in the trees and on top of buildings trying to get a glimpse of the game—it was too full for them to get in the stadium. It was an amazing football game, and what was up until then a cross-county grudge match became a true rivalry. Bryant grew and became really competitive.”

And while his work kept him busy writing about the accomplishments of the Bryant student-athletes for the past few decades, Rob garnered accolades and fans of his own along the way. His years of sports writing have been lauded by Bryant Athletic Director Mike Lee, Shane Broadway and others—all of whom struggle to come to grips with envisioning the future of Hornet athletics without the longtime ‘Voice of the Hornets.’

And as he closed up the BryantDaily in June, the City of Bryant named June 30, 2021, Rob Patrick Day in honor of his 34 years of diligent service, hard work, and dedication to the Bryant Hornets, solidifying his place as a community favorite and mainstay. And just as the words on the proclamation read, that Rob’s “unique style of candor, sense of humor and passion provided comfort, joy, information and inspiration to countless people throughout his career” could not be truer.

Saline County is forever grateful for Rob’s service, and the absence of his voice will leave a void in the hearts of all who love the Bryant Hornets.