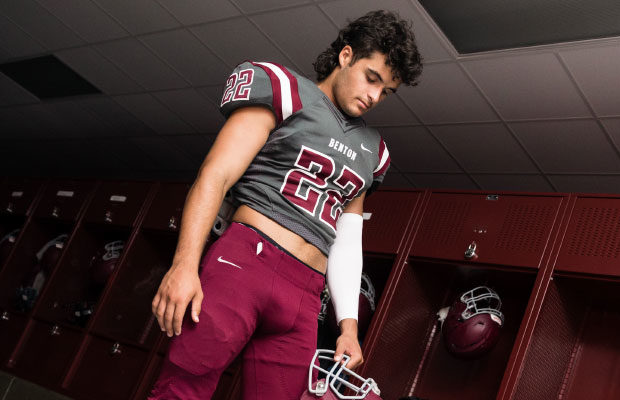 It is rare when hype meets reality. Expectations build up to a point that, despite the best of efforts, outcomes don’t reach the bar of lofty goals. Even rarer is the player who simply does his job, plays his role without fanfare, and in the process builds the mold for those that follow.

The Benton Panthers have such a mold in the making with Cain Simmons.

Cain is the son of Creighton and Celita Simmons. “I knew I wanted to play football when I was a little kid, as I got to watch my brother play high school football,” says Cain. “I started in fourth grade. I played linebacker and fullback for the Patriots in the Future Panther Football League.”

As they say, the rest is history. Cain enters the fall as a senior for the Benton Panthers with the chance to become the All-Time Leading Tackler for the team.

Cain is 5’ 9” tall, weighs 175 pounds, bench-presses 285 and runs the 40-yard dash in 4.59 seconds. Those who know him describe him as “small for a defensive back”. But his defensive numbers are those of a much larger player.

“I like playing defense because I like hitting,” says Cain. “I look up to Budda Baker (safety for the NFL Arizona Cardinals) because he isn’t the biggest but he plays with no fear.”

Terry Benham and Jim Gardner have been the broadcasting voices of Panthers football for many years. Cain caught their attention as far back as the eighth grade.

Gardner has been watching Cain since the Future Panther days. “He is a gifted athlete, but more so, plays with great heart and tenacity. He is unique in terms of ability, energy and toughness. I’ve always been impressed by how Cain plays bigger than his size. He’s been as good and sure a tackler, especially in open space, as I can remember. The guy just doesn’t ever miss a tackle. Statistically, he’s topped the 100-tackle mark each of his two high school seasons. His sophomore year (2019), he was second on the team in tackles with 103, forced and recovered two fumbles, had three interceptions and four pass break-ups. His junior year (2020), he led the team in tackles with 102 [despite missing one game], recovered a fumble and had four pass break-ups.”

Benham takes the description further. “Cain has a chance to become the all-time leading tackler this season, and that says a lot about his ability to play the game of football. Cain has always been an incredible athlete and just had good football instincts like his brother Collin. Many times, I can’t see the number of the tackler initially from the booth, but when I see the ball carrier’s legs go up in the air, I know Cain was somewhere in the mix.”

The highest praise for Cain comes from his head coach, Brad Harris. “Cain is a very aggressive player who likes contact and has a nose for the ball. He is also one of our fastest players on the team so that makes him even more dangerous; he can make plays from sideline to sideline. Cain reminds me of Stone Paul, who played safety for us in 2014. Stone had a great nose for the ball and was a playmaker for us. Stone has been one of the best safeties I have coached in my career, and I put Cain in that category. But one thing that makes Cain better is his speed: he is much faster to the ball than Stone was for us in 2014.”

Harris continues, “Cain is the leader of our defense. He will be a 3-year starter, and the guys on our team know that and look at him as our defensive leader. He will start at safety and will also return punts and kick offs. He may also play some wide receiver. So the bar is set high for Cain this season. We have high expectations for him—not pressure, but just expectations. He will live up to them, too, because he likes to compete. If I had one word to describe Cain it would be “Competitor.” He loves to compete and he does not like to lose!”

Cain’s approach to life off the field is a characteristic that many say is his strongest.

“He’s a bigger star off the field, in my opinion,” says Benham. “He’s just a good kid who doesn’t let his sports accolades go to his head. He just shows up, does his job, and enjoys his teammates. That attitude will serve him well long after the game of football is in his past.”

Coach Harris agrees. “Cain is a great kid. He is a good student, a good player, the type of young man you want on your team. You want your kids to grow up and be like Cain Simmons.”

Coach Harris adds finally, “Cain is kind of the quiet type before games, keeps to himself and just gets ready for the game. He studies film with us coaches during the week to get ready for his opponents, mainly personnel and knowing what each player is good at.”

Without a doubt, the coaches and players on the Hornets will be studying film, too—looking for ways to slow Cain down.