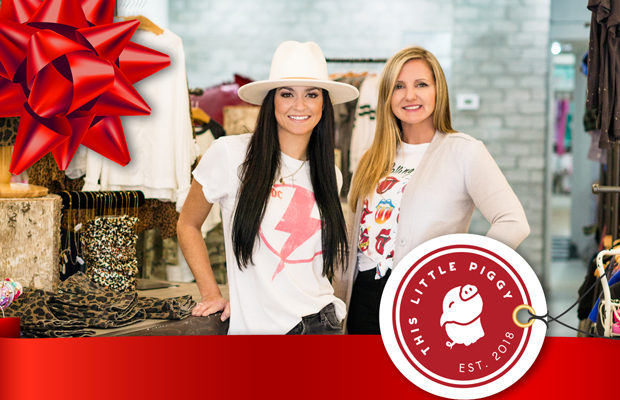 Where two moms saw the need, they found the way. That’s how Kate Moore and Aimee Brown describe their inspiration to launce This Little Piggy (TLP) children’s boutique and clothier.

“I have four children, and Aimee has two. We’d been talking about it with our husbands for years, but the time never seemed right,” Kate said. “When my husband (country music singer/songwriter, Justin Moore) and I had our fourth child, a little boy, he saw how I was struggling to find clothes and was ordering everything online. Aimee and I talked again, this time deciding, ‘Let’s do this.’”

Convincing Justin, and Aimee’s husband, Ross, took a little more time, but the four agreed to give it a shot by first starting as an online business.

“Our husbands are heavily involved with this, and this really is a partnership with the four of us,” Aimee said. “In fact, they thought of the store name. It comes from their love of the Arkansas Razorbacks, but it’s also a play on the children’s game.”

As online sales grew and This Little Piggy developed a following, the families decided it was time to find a storefront. They purchased the historic Bush Building (built in 1883) in downtown Benton, and in September 2018, This Little Piggy opened its doors.

“The [Bush] building is so cool with a lot of its original architecture and design still in place,” Kate said.

“An interesting twist also came along when we bought [the Bush Building],” Aimee added. “In addition to opening our store, we inherited a women’s clothing store (formerly McClain & Co.), which was also open in the building.”

The families chose to keep that boutique, too, and just a few months later, SoCo was in business. “That name comes from two of our children,” Kate said. “My son’s name is South, and Aimee’s youngest daughter is named Conlee. It was a nice fit.”

Kate and Aimee both come from retail backgrounds, and both admitted to some serious nerves when the day came to open This Little Piggy. “That day we were getting ready, and I turned to my husband and said, ‘What if no one shows up?’” Kate said. “He encouraged me, saying not to worry and that everything would work out. I needed to hear that.”

As it turns out, Kate’s husband was right.

“We opened for just four hours on a Sunday,” Kate said. “It that time, we did what we would normally do on a Black Friday. It was amazing, and we’ve kept going from there.”

Aimee said This Little Piggy’s customer base has grown since opening, and the two women are consistently busy balancing their businesses with their families and other responsibilities. She added that their stores have continued performing well during the COVID-19 pandemic.

“A lot of businesses have struggled these past few months, and while things have been different, we’ve kept things steady,” she said.

To attract those customers looking for trendier fashion choices for their children, This Little Piggy offers brands like Ugg’s Boots & Shoes, Pink Chicken, Nativ, Joe’s Jeans and Jelly Cat. The boutique is located at 117 South St. in the heart of downtown Benton.

They can be reached at 501.337.3027, or you can visit them online at www.shopthislittlepiggy.com