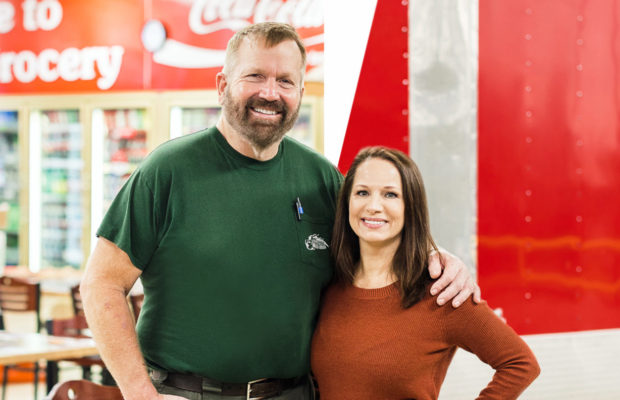 There was a time in the over 100-year history of the old Riverside Grocery that it may not have survived a pandemic. However, thanks to Rick Bellinger’s vision in the early 2000s, the now-versatile business barely missed a beat during the great COVID-19 pandemic of 2020.

“The store has done OK, decent this year,” Bellinger said. “A lot of businesses have struggled to stay afloat and our catering business really got knocked down this year, but our store business picked up, so overall, we are running about the same as we were a year ago. I hold my head up, and I’m thinking I’m more fortunate than a lot of others because we have such a versatile business and offer so many things to do.”

When Bellinger bought the small convenience store and gas station situated outside of Benton on Highway 5 in 2004, he saw the potential that food, particularly catfish, could bring. By 2010, he started a small catering company that has now become a staple of his operation and has changed the name to Riverside Grocery and Catering. Catfish catering brought his business to a new level and the reputation of that catfish and a few other services helped stabilize the business during the bizarre year.

“[Catfish] is our staple item,” Bellinger said. “That’s what drives our business. Our whole business model revolves around it.”

The small store on the highway with the Saline River as its backdrop features gas pumps from 1919 and has had four owners since World War II. Cecil Jones acquired the store first and operated it until the early 1980s. In 1983, new owner Stan Woodall rebuilt the store after a tornado destroyed it. When Woodall died, Diane Payne leased the store from Northern Oil and operated it with her mother until 2004.

By then, Bellinger had already established a long grocery career. He had begun with the Food 4 Less chain and worked in management until it was bought out by Wal-Mart in the ‘90s. He then moved on to Searcy-based Sexton Foods, eventually becoming a district manager managing five stores. By the early 2000s, the owner was about to retire, and Bellinger wasn’t interested in working for a different boss. In the meantime, one of his Sexton co-workers attended church with Payne in Benton and discovered Payne wanted to sell the country store. Bellinger jumped at the chance, and he and a partner bought the business.

Initially, Bellinger intended to focus on the grocery business, but he realized there was no way the location could compete with major supermarket chains. Fortunately, Riverside patrons had become used to Payne’s lunches. She and her mother had prepared their own lunches at the store and eaten while they worked, and soon patrons had noticed the enticing aromas and asked to buy the meals.

The Paynes began serving lunch, and Catfish Fridays became a tradition for many customers. Bellinger expanded the menu and offered more breakfast items and also offered a variety of lunch entrees, eventually adding Taco Tuesday and Barbecue Thursday to the Catfish Friday special. (Now, a catfish basket is always a menu choice but is featured on the lunch line on Fridays.)

The focus on food grew the business and in 2010, Bellinger bought out his partner. Soon after, he addressed a demand for catering. Payne had used Riverside to cater small business lunches, delivering catfish to offices. But Bellinger admits the quality diminished while the fish was in transit. Shortly after he and his wife became the sole owners, he bought a catfish trailer from a Cabot proprietor. He even worked a few jobs with the owner to receive a tutorial on the operation.

“When doing the business plan for the one trailer, I calculated that if I could do two jobs per month, I could pay this trailer off in three years. After it got rolling, all of a sudden we were doing two jobs per week and then two and three jobs per day,” Bellinger said. The operation grew to three trucks, and in 2019 the catering side of the business soared to record numbers.

Bellinger got creative keeping his businesses running amidst the pandemic. Services such as propane bottle filling and deer processing took off and helped ease the burden of the loss of catering jobs. Like other restaurateurs, Bellinger marketed take-out and to-go orders of catfish and other meals and customers responded

“We had to change our business model a little bit,” Bellinger said. “Especially, on Fridays where we are used to having 70 percent of our business sitting down in here. We still only have probably half of our tables in here right now.”

Not only were business restrictions disappointing, but Bellinger couldn’t fulfill his duties as the President of the Board of Directors of the Benton Area Chamber of Commerce for 2020. But he will fill the President’s role in 2021 if the year should include some sense of normalcy.

Bellinger is thankful 2020 wasn’t worse, and he is hopeful this year he can represent the Chamber and his businesses will begin to thrive again along with others in the area. When it does, he will host a large celebration.

“As soon as this mask mandate is lifted, we’re going to have a big burn party,” Bellinger said. “We are going to have a live band and a big bonfire where you can come by and throw your mask in. That will be a great time.” νNate Olson