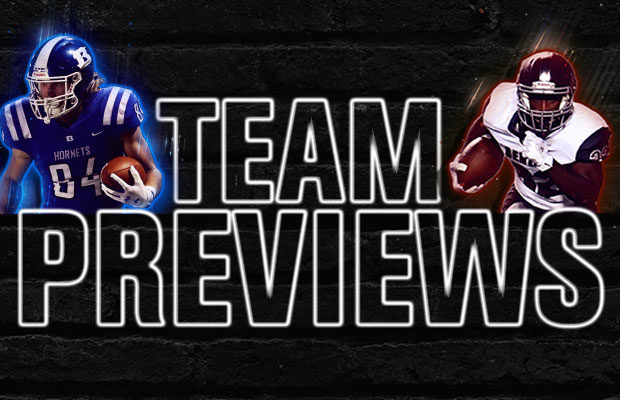 “It’s going to be a whole different look; the fans are going to want to bring their programs,” James said.

The Hornets are riding a 30-game winning streak and have rattled off three-straight Class 7A State Championships, but only a few players remain from last year’s undefeated team. Nevertheless, a fourth straight trip to War Memorial Stadium in December remains the goal.

“We play a lot of kids, and that helps,” James said. “When you play 60 kids, some of those guys that don’t start get a lot of experience, so it’s more like rebuilding than reloading the next year.”

Still, the Salt Bowl and the electric atmosphere a large crowd at War Memorial Stadium creates could stir some butterflies amongst the inexperienced Hornets.

“Some of these guys were in the bleachers watching last year,” James said. “When we played 7-on-7 we had several guys that had never done that—and it was the same thing with team camp. There is a learning curve, and our nonconference season is how we get ready for the conference.”

James said Burnett has “looked great as a runner” and is rugged enough to play running back, H-back or even linebacker. Pinney was a JV receiver in 2020 and is a “running-type quarterback” who is improving as a passer, James said. Motes may be the quarterback of the future, as he so far has taken a similar path to recently-departed Austin Ledbetter, who cemented himself as one of the greatest Bryant quarterbacks in school history with Parade All-American honors. He will be a freshman on the University of Arkansas baseball team this fall. Motes is also a baseball standout, playing for the Hornets at first base as a freshman. James said Motes is “very talented” and is working to get acclimated after missing spring practice with a foot injury he sustained in baseball practice.

Junior Chris Gannaway (5-9, 140) is the only running back with any experience. Gannaway has impressed in the offseason with 4.5 speed and an ability to catch the ball out of the backfield, which could be hard on opposing linebackers covering him, James said. Senior Alex Strong (5-9, 165) is also working at running back and “has really progressed.” Several sophomores may also be in the mix, including Martavian Miller (5-8, 175), whose older brother LaTavion Scott was a star running back for the Hornets in 2017–18 .

Senior Blake Everett (6-0, 175) is the only returning starter at the skill positions. James said he has improved in the offseason and is “a great possession receiver who blocks well and should have a big year for us.” Junior Jordan Knox (5-10, 165) saw extensive time on special teams in 2020 and ran back a kick-off for a touchdown in a blowout of Marion and will have an expanded role this season. Junior Braylen Montgomery (5-10, 175), and senior Daizure Hale (6-1, 185)—whom James calls “an impact player”—are also fighting for snaps.

Junior Braylon Brown (6-2, 175) has recovered from a shoulder injury he endured in the spring and could figure in at tight end or receiver.

James gushes when discussing his stable of offensive linemen, which could be the major reason Bryant has a chance at another state title.

A pair of senior Division I tackle prospects heads the list. Will Diggins (6-4, 290) bench presses over 300 pounds and has started every game since his sophomore season. He has offers from Kansas, Baylor, Arkansas State and Louisiana-Monroe, among others. Brooks Edmonson (6-5, 285) bench-presses 300 pounds and power cleans 400 pounds and has also received offers from Kansas, Baylor, Arkansas State and a handful of Ivy League programs, as he boasts an impressive academic resumé. Both tackles will play on the defensive line more this season with more depth available.

A pair of players will vie to replace departed kicker Brock Funk, who begins his freshman season at the University of Central Arkansas. Junior Stephen Fuller (5-9, 175) served as the JV kicker in 2020 and kicked in the state championship game when Funk was injured. Junior Malachi Graham (5-11, 180) also kicked off during that game and could do that again along with an expanded role on defense this year.

Senior Brandon Jones (5-11, 250) is the lone returning starter on the line. The versatile Jones can play inside and out and bench-presses 350 pounds, squats 500 pounds and deadlifts 700 pounds. Junior Tyler Mosley (5-11, 245) earned various all-sophomore accolades a season ago at tackle and end and returns more seasoned and polished. Classmate Jaylon Russ (6-0, 240) also benefitted from playing time at tackle a season ago.

Senior Joseph Flores (5-9, 225) looks for snaps inside after impressing on the JV squad in 2020. Classmate Grant Reidmuller (6-0, 245) seeks significant snaps after enduring an injury last season. One of the strongest Hornets, senior Chris Elder (5-10, 250), bench-presses more than 350 pounds and squats more than 250 pounds. After a productive offseason, he looks to contribute inside.  Senior Angel Sanchez (5-10, 230) adds depth inside.

Senior Gavin Burton (6-0, 195) leads a fairly experienced linebacker corps. Burton, who is a catcher on the baseball team, manned the outside a year ago. Junior Will Cornelius (6-0, 195) also saw playing time on the strong side. Cornelius, who bench-presses 325 pounds, worked hard in the offseason on his pass coverage. Junior John Ede (5-11, 190) started last season early but was injured.

James said senior Cameron Booth (6-1, 210) has a “college-type body” and is looking for a starting linebacker spot after starring on special teams in 2020. Junior Jaylon Brown (6-2, 185) looks for snaps on the outside after shining this summer.

Graham, the kicker, will be counted on to lead the secondary at safety. He impresses James with his combination of pass coverage skills and physicality. Juniors Traylon Russ (5-10, 165) and Josh Rice (6-1, 175) will also compete for safety snaps.

Miguel Graham (6-2, 165), Malachi’s twin, impressed this summer as he tries to lock up a cornerback spot. Senior Dylan Williams (6-0, 175), Logan’s twin, has established himself after a standout off-season and is set for extensive action in 2021. Junior Gabe Allen (5-8, 155) made a name for himself “as a big hitter” on special teams last season and will be in the mix. Junior Ethan Primus (6-0, 160) plays with a reckless abandon that James appreciates, and adds depth along with industrious senior Connor Corley (5-9, 180).

The hurt and anguish evident in Benton Coach Brad Harris’ voice broadcast on statewide airwaves on the first playoff Friday night in Arkansas last fall wasn’t caused by a Panthers loss. It was worse than that. Benton didn’t even get to play its scheduled game with Marion due to COVID-19 cases and contact tracing among players, so the Panthers forfeited, and the season was over.

“We had a really good week of practice and felt good, and then it got pulled out from underneath us on Thursday,” Harris said. “We didn’t get an opportunity to finish the season. That’s tough.”

For the returning players, that abrupt end has been fuel for offseason workouts as the squad prepares for the 2021 season opener—the Salt Bowl against Saline County rival Bryant.

“Ending the season like that was a tough pill to swallow, and we want to get back on the field and are excited to play,” Harris said.

Three quarterbacks are vying for the spot left by departed two-year starter Garrett Brown, who passed for more than 8,000 yards in his career. Junior Jack Woolbright (5-9, 155) impressed as the junior varsity quarterback with mobility in the pocket. “He brought an exciting dimension that I hope he can bring to [the varsity],” Harris said.

Senior Andre Lane (5-9, 200) was a big-play receiver for the Panthers a year ago, but worked out under center in the offseason. Harris said he’d like to “keep him at receiver” although the coach admits he “throws a great ball and is dynamic.” Lane was the second-leading receiver last year with 57 catches for 715 yards and a touchdown. He is also a threat at kick returner. He is receiving recruiting attention from Arkansas’ NCAA Division II programs.

Sophomore Hudson Chandler (6-0, 200) was pressed into action in junior high because of injury, and Harris said he is “in the mold of Brown” as a pocket passer. Classmate Payton McNeely (6-2, 225) seems likely to help immediately as a wide receiver or H-back, but he did take some snaps under center in the spring and was a starting signal caller in junior high in 2020. McNeely impresses in the weight room with a 315-pound bench press and 400-pound squat.

Senior Casey Johnson (5-11, 200) is a two-year starter at running back, running for just under 1,000 yards as a sophomore and eclipsing the 1,000-yard mark in 2020. “He’s tough to bring down and gets downhill and runs tough,” Harris said. Arkansas Baptist College has offered a scholarship, and Harris said several of the state’s D-II schools are also interested.

Versatile Donovan Pearson (5-9, 180) will see snaps at running back and receiver in 2021. “He is one of our better skill guys and has gotten faster. He is electric.” Sophomore DeAngelo Clay (5-11, 165) is a West Memphis transfer and reminds Harris of a younger Johnson.

Two senior returning starters anchor the offensive line. Christian Evans (6-3, 235) returns at right tackle and Walker Davis (6-3, 275) shifts from left guard to tackle. Harris lauds Evans’ tenacity, familiarity with the scheme and effort and calls Davis “as good as anyone we’ve had on the Benton line in a long time.” Davis bench-presses 355 pounds and power cleans 455 pounds.

Junior Karter Sanders (6-0, 255) is penciled in at center after playing extensively on the JV squad last fall and improving in the offseason.

Senior Eli Krebs (5-10, 255) shifts over from the defensive line “because of a need” and can play guard or center. Krebs is a 4.0 student and Harris credits his intelligence with his seamless transition. Sophomores Tanner Holden (6-0, 230) and Caleb Purdy (6-0, 320) will also compete for snaps.

A trio of soccer players will compete for the kicking duties. Juniors Lucas Wilber (5-11, 145) and Tate Sparks (6-1, 155) have kicked since junior high. Senior Dillon Bosley (6-0, 155) auditioned in the offseason nailing a few kickoffs into the end zone, but he was injured playing soccer in the summer, so he won’t resume football activities until fall camp.

Junior Hunter Goodwin (6-1, 235) worked diligently in the offseason to add 25 pounds to his frame and has impressed with his intensity, solidifying a spot at defensive end. Senior Conner Jewell (5-8, 225) has a “good motor” and could play end or nose guard. Senior Brendan Matthews (6-0, 230) could play inside. Junior Jaquese Caple (5-11, 245) and sophomores Ian Alvarez (6-2, 190) Jordan Burr (5-9, 210) will compete for snaps. Junior Dylan Stopp (6-1, 230) transferred from Kansas at the end of the school year and tried to get acclimated after playing on the defensive line at his previous stop. Davis will also fill in at nose guard “on situational plays,” Harris said.

Senior linebacker Beau Wright (5-11, 195) is the Panthers’ second-leading tackler with 93 stops in 2020. Wright, who returned a fumble 80 yards for a touchdown against Little Rock Parkview last year, “loves the weight room” and set the state weight meet power clean record with a 350-pound lift. He also bench-presses 335 pounds. Wright also could punt for Benton this season.

Speedy senior Jadin Collinet (6-0, 190) is entrenched at cornerback after seeing action as a junior. He stood out during 7-on-7 competition in the summer, Harris said. Junior Perverious Perkins (5-11, 155) isn’t large in stature, but Harris said “he is pretty physical” at cornerback. Diminutive juniors Jayvon Parker (5-7, 145) and Jamarius Morgan (5-8, 155) will also compete for snaps.

Junior Tyre Jimmerson (5-10, 160) played JV as a junior but earned the free safety job in the spring. Promising sophomore Chris Barnard (5-9, 180) will also see snaps as he adjusts to the scheme. Junior Patrick Shipp (5-10, 160) could see snaps at either safety spot.

Senior returning standout Cain Simmons (5-9, 177) has totaled over 100 tackles the past two seasons from the bandit position—a hybrid linebacker/defensive back position used in the 3-3-5 scheme. Simmons has thrived and is “our best defensive player.” Simmons impresses with his physicality and ability to patrol sideline to sideline.