Failing To Plan Is Scary 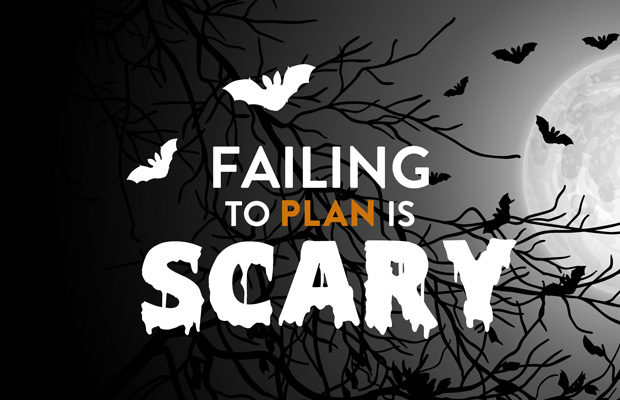 Michael Jackson’s music video for the song “Thriller” was one of the most influential in history. Jackson himself transformed into not one, but two terrifying beings—a werecat and a zombie—and a number of other frightening creatures made appearances as well. Vincent Price, a horror film legend at the time, provided a chilling voiceover. The combination of the plot, the sounds, the costumes, and the graphics prompted Jackson to insist on including a disclaimer at the beginning of the video that said, “Due to my strong personal convictions, I wish to stress that this film in no way endorses a belief in the occult.” The video was a groundbreaking artistic success.

Despite costing an unprecedented (at the time) $900,000 to produce, the video was a huge financial success as well. It pushed the album that shared its name to become the highest selling in history, with estimates in excess of 100 million copies worldwide. The album was nominated for 12 Grammys and won eight, another record. Even the documentary about its production, “The Making of Thriller,” sold a million copies. People regularly recreate the iconic dance scenes to this day, and most would recognize the song after only two notes.

But as groundbreaking and lucrative as it was, if you look up the description of the song, “Thriller,” on Wikipedia, here’s what you’ll learn:

“Thriller” is a post-disco/funk song. Set in the key of E major, the song has a moderate tempo of 120 beats per minute. The lyrics and sound effects on “Thriller” pertain to frightful elements and themes.

Not particularly thrilling. Sometimes the substance of a thing is hard to describe in basic terms. Sometimes you have to dig a little deeper to comprehend its value.

This concept extends into my field of estate planning more than you might expect. I’ve grown intentionally repetitive with my use of the phrase, “you need a plan.” I even made that the title to my book. But the truth is, simply declaring, “I have a plan,” without going deeper is about as helpful as describing “Thriller” as a song set in E major. It doesn’t tell you much.

The top estate-planning goal for most families is to stay out of probate court, but a plan that relies solely on a last will and testament won’t do that. A will is actually a set of instructions to the judge who will handle your probate, not a tool to help you stay out of probate. You must go further to meet the goal of probate avoidance. And you should—the probate process is not something I’d wish on any family.

Another goal for many families is asset protection from the rising costs of long-term care, but almost no typical estate plan will do that. It takes specialized planning to shelter assets from nursing home and other long-term care costs. But many think what they’ve done—created a revocable trust, for instance—will do the trick. There’s nothing scarier than facing imminent major long-term care costs thinking you’re protected and learning at the last minute that you’re not. No estate plan is very valuable to a family if there’s no estate left to pass on because of debilitating healthcare costs late in life.

There are a lot of songs set in the key of E major, even some with a tempo of 120 beats per minute, but that doesn’t make them “Thriller.” There are a lot of people who can honestly say they have an “estate plan.” But that doesn’t mean they have a good plan, a thorough plan, a plan that will come through for their family when life hits. Unfortunately, many plans are not actually designed to meet the goals their creators had in mind when they finally sat down to put something in writing.

You need a plan, but not just any plan. Failing to plan is scary, but so is relying on a plan destined to fail. Check out ElrodFirm.com.