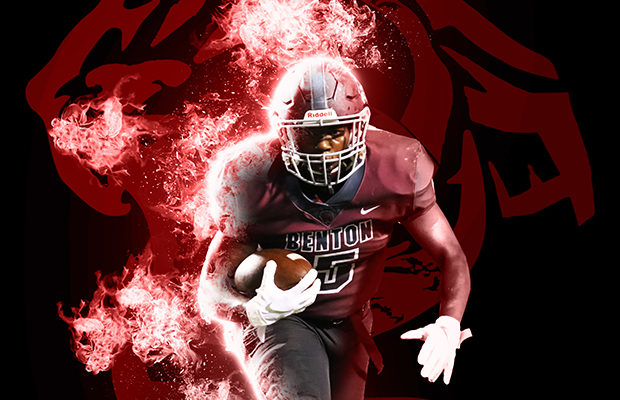 When Brad Harris came to Benton in 2014 as the defensive coordinator, the program was making its ascent under former Coach, and current athletic director, Scott Neathery.

With Harris at the helm since 2016, the Panthers have firmly staked their claim as one of the top programs in Class 6A. Benton begins the 2020 campaign looking for its third straight state title berth and back-to-back conference crowns.

“We have had two really good years back-to-back,” Harris said. “A lot of people would be really frustrated not winning, and I wish we had won, but we have set a standard at Benton. Our kids expect to go to the playoffs, and they expect to play for state championships. We had two really good senior classes that graduated. We are really excited for this year and to see what this group can do.”

Harris saw the momentum of last year’s run continue into the offseason, but some of that was halted with the 11-week hiatus created by the COVID-19 pandemic.

“I felt really good going into March,” said Harris, whose team lost 28-27 to Searcy in the 6A State Championship game last fall. “That’s when we are really able to get faster and stronger. We’ve come back well [in June and July], and that’s been good. I am excited how we have responded after the 11 weeks.”

All of Benton’s talented starting receiving corps from 2019 graduated, but Harris is optimistic about the passing game, since senior veteran quarterback Garrett Brown (6-1, 195) returns. Brown was inserted into the lineup midway through his sophomore year due to the starter’s injury and has already passed for over 5,000 yards for his career.

“He’s racked up a number of wins and experience, and I am pretty pumped to watch him grow as a senior,” Harris said.

Junior Gianni Vannucci (6-1, 180) is a hard-hitting free safety but is also a dual-threat quarterback dating back to when he started there in junior high. He will serve as the backup. Sophomore Jack Woolbright (5-9, 155) reminds Harris of Brown when he was that age. Seeing how his brother Jaden, a former Benton player and Arkansas State baseball commit, developed physically through this career has Harris encouraged that the younger Woolbright will grow as well.

Junior running back Casey Johnson (6-0, 185) was thrust into the starting role last season the final week of the season into the playoffs because of injury. He managed to rack up 900 yards and should total many more this year as the featured back.

“He has a chance to be really good,” Harris said. “He reminds us a lot of Zak Wallace [former Benton star running back]. He may even be a step faster. We like how Casey runs, and he has gotten even better during the pandemic. He has worked hard and loves football.”

Senior Michael Jefferson (5-8, 175) returns to the squad after being ineligible last season. Harris said the team missed Jefferson and that his speed and elusiveness is a good change of pace to Johnson’s hard-running style.

Junior basketball player Cameron Harris (6-3, 190) should add some big-play capability to a depleted receiving corps. Harris didn’t play football until last year because of two meniscus tears in his knees during basketball. He started to show progress recovering from the injury last year around midseason, the coach said. He made a pivotal touchdown catch in the semifinal playoff win against West Memphis.

“He is going to be really good. He’s got a lot of upside,” the coach said.

Senior Jordan Parham (6-1, 210) fills the tight end/H-back position. Harris said his soft hands and ability to catch the ball over the middle make him a quality possession receiver.

Senior Tristan Hawkins (6-2, 190) is a star pitcher on the baseball team and committed to UALR over the summer. He hasn’t played football but decided to play his senior year and should see snaps behind Parham.

Senior Donovan McGee (5-9, 170) comes to Benton after playing the past two years at Bossier City (La.) Airline High School. “We are learning about him, but he is explosive with 4.6 speed and physical. He will push for snaps.”

Harris said the offensive line “will be a mixture of seven or eight guys.”

Senior David Hassman (6-4, 270) was a junior varsity player a year ago, but a growth spurt last year with a productive offseason caught Harris’ attention. Hassman could start at one of the tackles, with Watkins or Davis moving to guard, Harris said.

Junior Christian Evans (6-2, 220) saw snaps as an undersized guard in JV games in 2019. Harris said what he lacks in size he makes up for with intelligence and leverage.

“We are excited to have him back. He is big with a strong leg,” Harris said.

The defensive line will rely on inexperienced returners at the end spots. Senior Terrence Hall (6-2, 230) is a leading contender at end after playing JV the past two seasons. Classmate Hayden Purdy (6-3, 250) saw some varsity snaps last fall. Senior Mason Simmons (5-11, 235) moves from running back to end, seeking more snaps.

Watkins, the returning offensive line starter, will see double duty at end. “He would be our best defensive linemen, but we need him on the offensive line,” Harris said. “We try not to play our players both ways until they are seniors and comfortable.”

Senior Gavin Davis (5-9, 220) saw significant playing time in the middle in 2019 and is a prime candidate to start there this year. Junior Beau Wright (6-0, 190) put himself into a position for increased snaps with an intense workout regimen in the offseason that included cross fit. Harris said he power cleaned 325 pounds in March before the pandemic.

Sophomore Jake Jones (5-10, 185), a promising baseball prospect, was “the emotional leader” on the junior high squad last fall Harris said. Harris said if he can carry over that effort to the varsity level, he will see snaps in 2020.

Senior cornerback John Dirst (5-8, 165) should fill a starting spot for the first time in his varsity career this season after rotating as a junior. Harris said opponents who think they can pick on the undersized Dirst are mistaken because of his instincts and toughness.

Senior Omari Coats (6-0, 155) wasn’t eligible last fall but the fastest Panther should help at cornerback in 2020. Coats clocked an 11-second 100-meter time in track last spring and is in the 4.5 range in the 40-yard dash. Classmate Anthony Neloms (5-10, 160) is looking for significant varsity snaps for the first time in his career.

Sophomore Brody Blanton (5-9, 155) has impressed Harris with his speed and ball skills after playing receiver and defensive back in junior high.

Like his classmate Smith, Jackson Drewery (5-9, 155) saw snaps at free and strong safety in 2019. The smaller Drewery is tough, and boxes in his spare time. “I wouldn’t be surprised if he ended up competing in UFC or something after high school. He plays much bigger than he is.”

Junior weak safety Cain Simmons (5-9, 175) is the star of the secondary. Simmons, an all-conference performer in 2019, racked up 113 tackles. His 4.6 speed and knack for contact make him a dangerous defender.