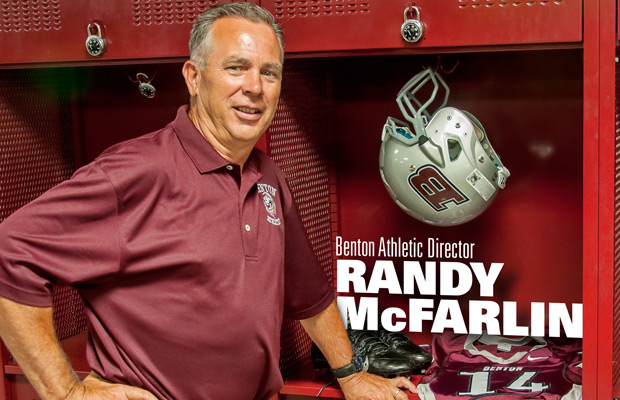 After more than 30 years of experience in all positions of high school sports, assistant coach, head coach and athletic director, Randy McFarlin knows a thing or two about building a program from ground up.

“It certainly takes a commitment from everyone involved,” he said. “From coaches and the student athletes to the administration and community. It takes everybody.”

Knowing that he accomplished such a task in the hotbed of Texas high school football, there’s no question he earned his stripes against some of the best.

McFarlin officially took over as Benton Athletic Director on July 1.
He brings with him 35 years of coaching experience, 20 of which were spent as head football coach/athletic director at Dangerfield and Whitehouse High Schools in the
Lone Star State.

“A lot of schools in Texas put the roles together, head coach and athletic director, and it stretches you thin sometimes,” he said. “[Benton Superintendent Jeff Collins] was in Tyler [Texas] and saw what we did at little ole’ Whitehouse. He took note
of that, and when the [Benton] job came open, I’d been wanting to transition into a straight athletic director role.”

It was hard not to notice what McFarlin, now 59, was doing in his tenure at Whitehouse. In nine seasons as the Wildcats head coach, He amassed 61 total wins and took his team to the Texas State Playoffs in seven of those seasons. He also had two 10-win seasons.

“We started winning, and that little community rallied together,” he said. “You saw their sense of school and community pride just get bigger and bigger, almost overnight.”

In 2012, Whitehouse School administrators announced they were taking their athletics department in a different direction, adding that McFarlin’s contract wouldn’t be renewed. According to numerous media reports from that year, it was a decision that didn’t sit well with many at the school or in the community. After leaving the school, McFarlin spent the 2013 season as the defensive coordinator with Tyler (Texas) T.K. Gorman High School.

“I’m looking forward to hanging up the whistle and focusing on the administrative side of coaching,” he said. However, in that transition, McFarlin intends to instill his proven philosophy on his new stable of coaches.

“The number one step is unity within your coaching staff,” he said. “That’ll be the first thing I do with Benton, create a sense of family so that each coach supports each other. The student athletes will feed off that support and feel free to be multi-sport athletes and be involved in other programs if they desire.”

While creating a sound nucleus among coaches is McFarlin’s first goal, he insists that design is meant to create the best environment for the young men and women at Benton Schools.

“Athletics is the tool we use to teach, and we’re certainly part of the curriculum of the entire school,” he said. “[Student athletes] learn character, discipline, and the value of hard work. We supplement the educational process through what we do on the field.”

“I tell my coaches that you can’t evaluate your teams until sometimes 10 or 20 years down the road. You know, maybe it’s a lifetime before you see what you really did with a team,” he said. “Winning makes up for a lot of things, but equally important, I think, is having strong men and women coaching, influencing and motivate those students.”

Among the things that most impressed McFarlin when he visited Benton was the pride the community took in its athletics programs. “I sense that they want their teams to do well. They’re a lot like the community in Whitehouse.”

Equally impressive, he said, was the School’s commitment to success, especially through their new facilities.

“The softball/football/track complex is such a fantastic place,” he said. “There’s even a spot for the future baseball field. There has been great vision and planning getting ready for that. When a school makes commitments like those, you realize, ‘This is the place I want to be.’”

Also a sign Saline County was the place McFarlin wanted to be was the Texas-sized rivalry between his Panthers and the Bryant Hornets. He’s well aware of the coming Salt Bowl and what it would mean for Benton to get back on the winning side of that showdown at War Memorial Stadium.

“Rivalry games are important, no matter where you are,” he said. “They’re huge for a program and for fans’ bragging rights for the next year. We want it to be competitive for sure, but also in a sense of good sportsmanship where each program can do well.”

But McFarlin stressed that his will to win at Benton isn’t confined simply to football. “You’ve got to remember, we compete with Bryant on so many levels. It’s not just the Salt Bowl. We take them on in almost everything, and we want our community to know we’re there and competing on the same level in every sport and activity.”