Home / Issues / Zac Wallace: Taking the Lead and Running With It

Zac Wallace: Taking the Lead and Running With It 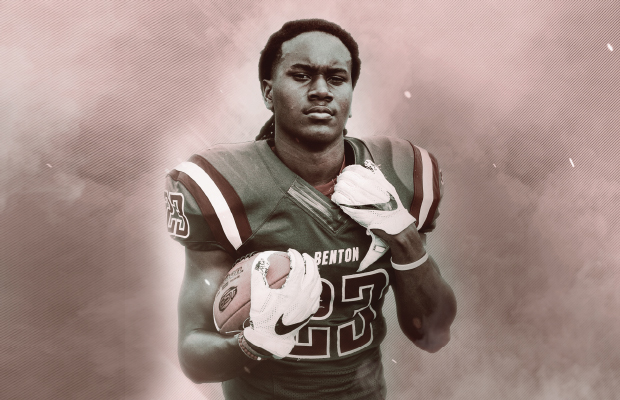 As the Benton Panthers take on the Bryant Hornets for one of the most anticipated high school football games in the state (if not the most anticipated), the team’s most seasoned players lead their younger counterparts. They come to the bright lights and cheering crowds for the last time in their player capacities, with promising futures ahead.

One of these respected leaders is Benton Panther running back Zak Wallace. While he may be quiet off the field, this 17-year-old takes the lead between those yard lines. The sport has helped Zak gain friends and attention on and off the field. He confidently enters his senior year at Benton High School with different colleges already interested in him.

Zak’s football days were secured early on. Growing up in a big family, he joined his siblings when he was a fourth-grader to play in the Future Panthers program. “I looked up to my two older brothers and wanted to be like them, so I followed them on the football field,” Zak says. He also has two sisters, one older and one younger.

Zak says he has gravitated toward football ever since he can remember. “We are a football family. I’ve always liked it and wanted to play.” In this Razorback country, he isn’t shy to admit that he is an Alabama fan, favoring college over professional football.

Friends and fellowship are two aspects of the sport that Zak says he enjoys the most. “I like playing next to my friends. I’ve made most of my friends through football.” In addition, he notes, he enjoys hearing the sounds from the cheering crowds. “I like when everyone is watching and into the game, especially when we make big plays and the cheers are so loud.”

This young athlete has accomplished several athletic feats – squatting over 400 pounds, benching over 300 pounds, running 4.55 in the 40-yard dash to name a few. With his tough build and accomplished athleticism, Zak expresses a thoughtful, calm and collected demeanor. And we’re reminded that even tough, strong young men get nervous.

“At the beginning of each game, I always get nervous,” Zak says. He will step away from his friends, get quiet and focus inward to help ease his nerves and make it easier to go with the flow. “I pray and then get in touch with myself for about 15 minutes, to focus on myself and what I have to do.”

The most important thing to remember is to have fun, Zak says. “I try to make myself have fun, stay calm and enjoy the game and process. It helps to get those positive vibes flowing.”

With those wise words, it’s no wonder that Zak is a leader on the field. “I’ve always been a leader, and especially now being a senior, I’m a leader. I take the responsibility to take the team on my back in hard situations.” People may be surprised to learn that Zak is quieter and more reserved off the field, he says.

It’s also probably no wonder that Zak runs track in the off-season. When he’s not busy playing football or competing on the track, Zak enjoys regular teen hobbies, such as video games, working out and pick-up basketball with friends. In school his favorite subject his history, he says, because he likes learning about the past and learning about different cultures.

When the lights go out on his high school football days, Zak plans to attend college somewhere for athletic training. He already has offers from places like Ouachita Baptist University, Missouri Western State, Army West Point and Arkansas Tech University. He has six offers now and hopes to have more come his way, he says, noting he looks forward to visiting them and making a decision early next year.

“It would be good to get away and experience someplace different, but I won’t be too upset if I stay closer to home,” he says.

As Zak considers the forthcoming year as his last as a Benton Panther, he ranks the Salt Bowl game among his favorite matchups. He scored five touchdowns in last year’s big game between Benton and the rival Bryant Hornets, and also earned All-State status for the season. “Bryant is good competition,” he says. A few of Zak’s cousins play for Bryant, so the competition is even more fun for this running back.

The Salt Bowl grows each year – last year more than 30,000 people attended – and Zak says he loves that aspect of the anticipated game. “More people keep coming, and the crowds are getting bigger and the atmosphere is getting better,” Zak says. “It’s the only game in the state on that Saturday, and the hype is so much fun.”