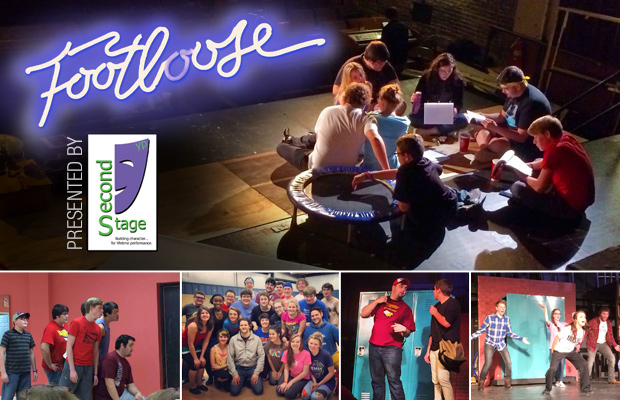 Photo by Justin A. Pike

The Royal Theater in Benton has been a significant landmark in the local community for generations, not only because it holds the distinction of being listed on the National Register of Historic Places, but because it’s two-story brick structure is also home to the Royal Players, a local community theater group.  The group was given the building by actor Jerry Van Dyke in 2000 after decades of various ownership and remodeling.

The Royal Players Young Players group formed in 2002 with an emphasis on teaching young actors all aspects of theater. The group began with approximately 45 members and in the last two years have had more than 100 kids involved, which has given them the resources to divide into age groups, so in 2013, they formed the Young Players’ Second Stage for ages 13 through 23.

The Young Players Second Stage focuses on the needs of adolescent and young adult performers and allows them to perform alongside seasoned adult actors that have been performing for many years. Founders Daphne Shoppach, Melissa Glover and Justin Pike select scripts tailored towards this specific age group. “This has been a very special and exciting endeavor for us, and the young performers are loving it,” says Pike. “We formed this group because we saw a need to further the educational horizons of the young talent in the area.”

The Young Players Second Stage inaugural production, Footloose, took place January 16-19, 2014, and was directed by Justin Pike.  Footloose was a popular film released in theaters in 1984, and then had a stage version that opened at Broadway’s Richard Rogers Theater on October 22, 1998 and ran for over 700 performances until July 2, 2000. It was nominated for four Tony Awards in the following categories: Best Book of a Musical, Best Original Score, Best Performance for A Leading Actress and Best Choreography.

In 2001, the stage production toured the United States, and included Patrick Kyle in the cast. Patrick is a New Yorker who took time out of his schedule last Fall to come to Benton and meet with the Young Players Second Stage cast of Footloose, which was a highlight for all members of the group. “Our visit with Patrick showed the young actors that no matter whether you’re singing in a youth theater production, headlining a national tour or dancing on Broadway, hard work yields high performance. It’s all the same thing where hard work is concerned,’ shares Pike.

“After Patrick’s visit, the most common remark I heard from the kids was ‘He’s so nice!’ and I responded with ‘Why wouldn’t he be? He started out just like all of you!” adds Pike. “The young actors were full of questions for Patrick and he answered every one. You could tell he had a lot in common with the kids and they all shared a mutual love for Footloose.”

The Second Stage group holds workshops monthly during the school year, and cover various topics pertaining to acting staging, auditioning, set-building, makeup and lighting. Shoppach explains more about this experience. “As Young Players are involved in a production, they get to put to practice the skills they have learned.  Also during a production, we have those that wish to learn about directing, stage-managing, or props management.  In this case they are named assistant to an adult with experience in these areas with the emphasis on teaching the kids that volunteer. It is our goal that the kids not only learn these skills but will in the process learn valuable team or leadership skills.”

They have the distinction of being the only year-round youth theater in the state of Arkansas that does not charge a performance fee to the actors. This is made possible because of the support from sponsors and volunteers. Sponsors for 2014 include Drs. Annette Enderlin and Sam Taggart, Everett Buick/GMC, Perry Young, Beard Engineering, Arkansas Prosthetics and Pedorthics, Susan Dill and Daphne Shoppach.

“We have a tremendous support team within our organization from our audience and from our sponsors. The best way Saline County can continue to support us is to come and see live theater or volunteer for a production. We are always looking for people to work box office, build sets, altar costumes, paint sets, and paint scenery” says Daphne.

The Royal Players are committed to improving the quality of life in the community by offering opportunities for creative activity, artistic expression and quality entertainment, and exist solely to for education and benevolent purposes.

“It’s my sincere hope that Second Stage raises the bar and makes our community look at the Young Players program in a whole new light,” Justin says. “I’m looking forward to watching the Young Players shine and shocking our audience with the caliber of breakout talent.”

After the Young Players Second Stage inaugural year in 2014, the Royal Theater in Benton may also become known for teaching the importance of hard work and “building character for lifetime performance” in young talent. And for that alone they should receive a standing ovation.