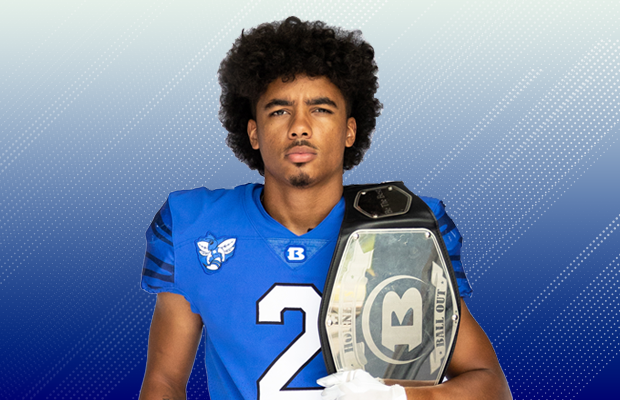 Tough. Consistent. Hard-working. These are the words Bryant’s Head Football Coach Buck James uses to describe senior outside linebacker Jaylon Brown. Fresh off of their fourth consecutive win as Class 7A State Champions, Jaylon and the Bryant football team are training hard to bring another exciting season to the gridiron.

Standing at 6’1’’ and 190 pounds, Jaylon Brown has been a member of Bryant High School’s defense since his sophomore year. While he may not be the biggest player on the team, Jaylon is nimble and versatile—skills vital to the role of defense. “My size is an advantage—you can always use your speed to your ability,” explains Jaylon.

Like many student athletes, Jaylon’s football experience began in elementary school on the flag football field. Born in Pine Bluff, Jaylon and his family moved to Bryant in 2010 and began participating in extracurricular activities in kindergarten. Together with his twin brother, Braylon, the brothers have spent the last twelve years on the field encouraging one another to achieve new heights.

With multiple state championships to their name, Jaylon describes being a Bryant Hornet and sharing those moments with his brother and teammate as “amazing!” Braylon plays wide receiver for Bryant. For these fraternal twins, spending these years together is a gift and at times they use their own unique language to communicate. “We help motivate each other, especially on the tough days,” said Jaylon. “If one of us is having a bad practice, or a bad play, there’s always a helping hand.One will tell the other what he needs to do to improve.”

Throughout elementary, middle school, and junior high, Jaylon developed his skill set for the game. Growing up he enjoyed playing offense and defensive positions, but when he reached high school Jaylon decided to hone his craft and chose to play for the defense.

Jaylon credits Coach James with helping him to refine his abilities both on and off the field.

“If you’re doing well on the field and doing what you’re supposed to, you’re going to know you are a good player,” explains Jaylon. “He’s fair and he’s a very good coach. He’s going to teach you discipline and it’s not 100% about football. Throughout your life you’re going to remember Buck James.”

One of Jaylon’s most memorable moments in his high school career came in November 2021, when he was named Farm Bureau “Defensive Player of the Week” against Conway High School. Bryant was down but ultimately came back to win 32-29, defeating the Wampus Cats.

“All that pressure built upon us and we were able to come out and play that game,” said Jaylon.

When it comes to focusing during the high-pressure situations of a game, Jaylon has a straightforward technique. “With all that pressure  on top of you, I shut down my whole brain to ‘X’ out all distractions,” he explains. “I take a deep breath and focus on the situation in front of me. If you think about it too much you won’t do well.”

Jaylon works hard to be consistent and he doesn’t take being a reigning state champion for granted. “You have to grind and you have to have determination. If you don’t have determination it’s not going to work for you. You have to work at your craft and at your position to be on top of your game,” he said. Even during the offseason, Jaylon trains year-round. “I’m determined to be the best player for the team,” said Jaylon. “I try to put in my effort to win.”

For now, Jaylon’s daily routine begins at 5:30 a.m. and by 6 a.m. he’s on campus working out with the team, running drills, practicing footwork and working on coverages. By 8 a.m. the hornets will scrimmage and wrap up their first workout around 10 a.m. He takes a break for lunch then attends his second workout of the day. By 5 p.m. he arrives at his evening shift at Walmart and works until 10 p.m. and starts his routine again, bright and early the next day.

“He’s a very unselfish player,” said Coach James. “He does his job, never misses a workout and never misses a practice. He’s everything in a high school athlete you’d want him to be. He’s an unsung hero and he flies under the radar. He’s tough and he works hard for the team.”

With the Salt Bowl and a new football season on the horizon, Jaylon is more focused than ever. “I’m looking forward to winning the games and keeping the Salt Bowl trophy, keeping the tradition going,” explains Jaylon. “My goal is to play college ball, to have a good season and win state again for my senior year.”

Following graduation, Jaylon is looking forward to seeing where the future will take him. “If football doesn’t work out, my backup plan will be to be a Registered Nurse,” he said. “I’m a nice person and I really want to help people. I enjoy seeing people smile, and as a nurse, you’re helping them.”