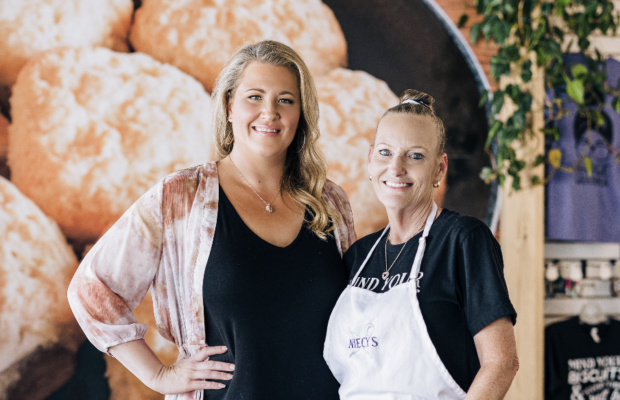 It’s all about the people at Niecy’s—a new downtown eatery that boasts home cooking and an all-day breakfast menu with oversized scratch-made buttermilk biscuits.

From the comfort food to the décor, everything at the restaurant is aimed at bringing the community a comfortable place to eat a home-cooked meal. It’s the goal of Niecy and owners Amanda and Scott Elliot and Parker Jones that no one leaves hungry, people feel at home, and the staff work at a place where they are treated with respect.

The crew have been working hard to provide such a place since February, when the homestyle eatery opened its doors at 1016 W. South Street in Benton. In those months they have quickly become known for a variety of traditional southern breakfast fare from classic eggs, bacon, hash browns, grits, gravy and homemade biscuits to fluffy sweet cream pancakes, savory western omelets, and oversized cinnamon rolls and pecan pinwheels—all served every minute the doors are open.

In recent weeks they have also waded into a weekday lunch special with rotating entrees like scratch-made chicken and dumplings, meatloaf, and baked BBQ chicken, with homemade desserts (think bread pudding, brownies, banana pudding) and sides like pinto beans, homemade mac and cheese, and corn casserole.

Niecy, Scott’s aunt, came to Benton from Texas in 2019 to work at the Elliotts’ other downtown business, Holy Roller bike shop. She left behind nearly three decades of work in a café in Texas and a lifetime of cooking for Scott, Scott’s brother, her family, or any kid who showed up in need of a meal.

She came to Benton ready for a change, with no intentions of returning to the food industry. But her love of feeding and serving people, and her dream of opening her own restaurant, never died. And last October those dreams were revived at an unlikely place—a bike event for Holy Roller at Tyndall Park, where she hopped into a food truck to help a friend catch up with the crowd.

“Scott came home and showed me this picture with Niecy grinning and handing him a plate of food, and we just looked at each other,” Amanda says. “He said, ‘Let’s open Niecy a restaurant.’”

Niecy quickly said “Yes,” and they began work on a menu centered around Niecy’s signature biscuits—the same biscuits her grandmother taught her to make as a little girl.

Niecy’s serves breakfast seven days a week, 5:30 a.m to 1 p.m. Monday through Saturday and 5:30 a.m. to 2 p.m. Sunday. They recently started serving a lunch special: a classic home-cooked entree and sides with a daily homemade dessert. Also new is the Tyndall Park concession stand, which will be serving a very limited to-go Niecy’s breakfast. And coming soon, Niecy’s will be expanding hours to serve dinner.

Amanda describes Niecy’s as a sit-down restaurant that makes you feel like you’re in a cozy home with classic country music playing and a staff who treats you like family.

“We worked to make the interior and details feel like a home—like Niecy’s house, which is a place everyone feels welcome. If you show up there, she always greets you with open arms and a plate of food. From the mismatched chairs to the dining room tables, we wanted this to feel like more than a restaurant or a business, like your aunt’s house,” Amanda says. “We wanted it to be the spot the men came for that early morning coffee around a big table, or where you bring your kids for pancakes and celebrate your birthday.”

Everyone involved in the restaurant considers the endeavor a mission to feed people. And they don’t mean just food.

“We want to not just feed people food,” Amanda says. “We want them to leave here with a smile on their faces because we took care of them and treated them well. Even if it’s just for that thirty minutes or that one hour of the day. God gave us a vision for this place and an opportunity to bring something to our community, and we don’t take it lightly.”

Feeding others has always been Niecy’s way to give back and provide for others. “There wasn’t always money to be given—it was my time and my food that I always had to give,” Niecy says. “But, it turns out for most people, that seemed to be the biggest thing they needed,” she says.

Aside from its storied buttermilk biscuits, Niecy’s is known for its homemade granola-on-fruit parfaits and is home to the French Biscuit, which they serve “shorty style”: a delicious creation of layers of sliced strawberries and whipped cream atop a buttermilk biscuit cooked like French toast.

“Niecy loves people,” Amanda says. “She treats every person who walks through the door with the same love and respect, and cooks her food with love. And it shows. She’s always coming up with some new twist on the classic Southern breakfast, and we have more ideas than we have days to implement them.”