When the Water Runs Dry 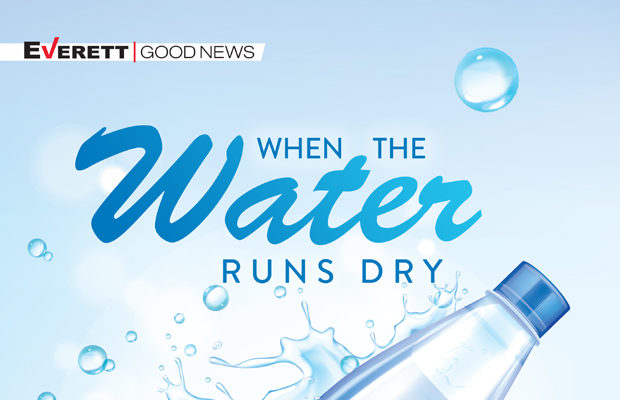 When it comes to significant weather events, years from now Arkansans will be saying, “Remember February of 2021?” During that month the arctic climate moved south and broke record lows and snowfall totals that had been in place for over a century. Saline County’s low was a brutal minus six degrees, and certain areas received more than 12 inches of fine powdery snow on top of a thin layer of ice. While the 2021 Snowmageddon was a beautiful sight and provided hours of fun sledding and building snow statues, it also caused major disruptions to electrical and water services here in Saline County.

According to David Vondran, General Manager of Benton Utilities, approximately 16,000 households or 40,000 people were without water for roughly eight full days; from noon on Thursday, February 18, until noon on Friday, February 25. “The initial, damaged fire hydrant leak was repaired by 3 PM on the first day; however, this leak was on a large, 16” water main. There was a lot of water lost in a short amount of time that first morning. Ensuing leaks continued to occur throughout the next 48 hours. These leaks were in various locations throughout the city, which broadened and compounded the effects on our water system and our consecutive water customers.”

The leaks caused a loss of water pressure whose effect was twofold. First, it prevented public and private restroom facilities from functioning properly. Second, it resulted in an advisory boil order that interfered with operations of school cafeterias and restricted the use of commercial ice machines and soda fountains in local restaurants.

Mayor Tom Farmer reached out to Dwight Everett and other local businesses for help. “We realized there was a crisis when the mayor of Benton reached out to Dwight and said the city needed water and he was having a hard time finding available water,” recalls Susie Everett. The Everett dealerships immediately responded to the call for help and donated water to the city. It wasn’t long before the schools also contacted Everett to ask for assistance with water needed for every student in order to reopen for classes. “Everett Buick GMC and Everett Chevrolet had already stockpiled water for the schools to be available during the pandemic for students. When the crisis for water became known we already had the resources, and instead of slowly and steadily giving water to the schools, we gave it all at once!”

After the water was donated, it took an amazing team effort to coordinate and distribute water to those in need. “Allison Drennon, our marketing manager at Everett Infiniti, coordinated the event. Our marketing managers, Lacy Brooks from Everett Buick GMC, Keeleigh Pitchford from Everett Chevrolet, and Olivia O’Neil, continued to supervise and make this distribution happen,” adds Susie. The Benton football team and coaches worked with many members of the Everett sales team to load 19,200 bottles of water at the dealership and unload at each school location. “We believe in giving back and try to be proactive as much as possible. If a need arises, we want to step up and help if at all possible. Our community is important and all of us need to work together and do what we can and give where we are able.”

In addition to this tremendous display of teamwork, Benton Utilities was able to set up two water distribution stations for our citizens with a lot of help from others. “Saline County Judge Jeff Arey and Mr. Brandon Guillot, with the Saline County Office of Emergency Management, assisted with the deployment of the Army National Guard. Water tankers referred to as ‘buffaloes’ were used to make potable water available to those who could make it out to the locations,” says David Vondran.

Mayor Farmer had this to say about the combined efforts of so many to get through the emergency caused by unpredictable Arkansas weather: “Our utilities were completely outstanding in responding to the crisis from all aspects. As soon as they were made aware of the situation they began work and did not stop working until everything was up to par for citizens. The water department, even though the weather temperatures were frigid, stayed after the problem to resolve it for our citizens.”

With the donations from the Everett dealerships and others, cases of bottled water were issued to those who reported to Benton Utilities that they were without water. The Mayor commended the water department on its persistence in fixing ongoing problems. “As things got fixed there seemed to be a little chain reaction and other things broke, but this did not discourage water department workers as they rose to each occasion to resolve the problems as quickly as they could to get water back to the citizens. Just another demonstration that together we can do more in our city.”