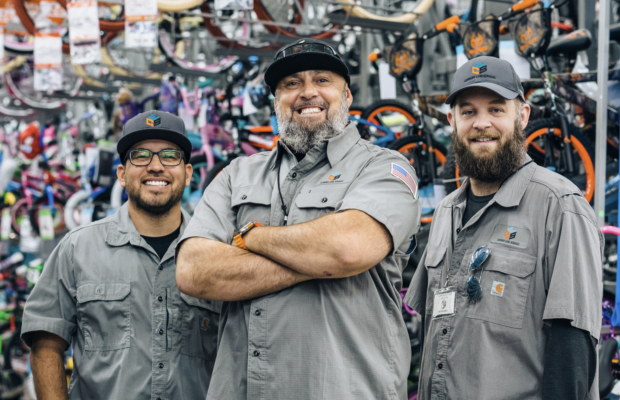 Supporting local businesses can look like patronizing a small bike shop on East Street in Benton—Holy Roller. It can even look like buying a bike at the world’s largest retailer—Walmart. The man at the helm of Saline County’s only bike shop, Scott Elliott, also steers the ship of a Benton-headquartered assembly business responsible for assembling every bicycle inside a Wal-Mart in the state of Arkansas.

“I saw those bikes and I said out loud, ‘We are here to change the game,’” Elliott says. “This is Bryant, where I grew up, and all my family and friends are purchasing these bikes that aren’t right.”

Change the game he has! With dozens of employees across at least eight states, assembling thousands of bicycles. On that first day, however, the outlook was anything but game-changing.

“Day one, we built twelve bikes in twelve hours at $7.25 per bicycle,” he says. “The future looked grim. But I was hopeful. It felt like my purpose deep down.”

Elliott continued building bikes, getting faster day-by-day; knocking out a whopping 225 in a day with a crew of assemblers he trained. Then he turned to building more than just bikes. He was building a business.

“Building a company this size was a very steep learning curve with a lot of hard knocks,” he says. “I give all glory, honor, and praise to God for giving me the ability to sacrifice my time, my efforts, my patience, my blood, sweat, and tears, and the drive to work hard and listen to Him and do the very next thing he says. That’s how you make it from one spot to another.”

Elliott says he always believed it would be worth the sacrifice, and today he, along with his wife, Amanda, and CEO and business partner Parker Jones, own several businesses.

“None of the businesses we have is possible without Economy Care Services,” he says. “Out of ECS was birthed Holy Roller. I felt the Lord was leading me to open a bike shop and have a place to know our craft better and to help the children of Saline County who needed bikes.”

Holy Roller is located in downtown Benton across from the municipal complex. It’s hard to miss the pink and turquoise building with a purple checkerboard garage door and neon wings and painted wing wall on the exterior. Holy Roller is a laidback shop with bikes for every level and stream of rider, from kids and BMX to race bikes, road bikes, and mountain bikes. A trio of experienced mechanics are on hand at the shop for repairs, from the most basic to the most intricate and advanced.

Holy Roller has given away thousands of bikes to kids in the community, the homeless, or even those lacking transportation to get to work. Each year they partner with the community to ensure that every child who is a part of the Cooper-Anthony Mercy Advocacy Center in Benton receives a bike.

The growth shows no signs of stopping as ECS delves deeper into in-home assembly.

“You buy it, have it shipped to your house, and we have our team of vetted, experienced assemblers come put it together in your home,” Elliott says.

Say goodbye to those late Christmas Eves putting together grills for dad, and trampolines and giant dollhouses for the kids. From furniture to toys to fitness equipment, Economy Care Services can assemble it in your home.

But, when it comes to passion, Elliott will always point to that two-wheeled Christmas staple—the bicycle.

“We live, breathe, and eat bicycles. We ride them and fix them and build them. There is not an entity in Arkansas that builds more bikes,” he says.