Home / Special / Out of Luck: The David O. Dodd Story

Out of Luck: The David O. Dodd Story 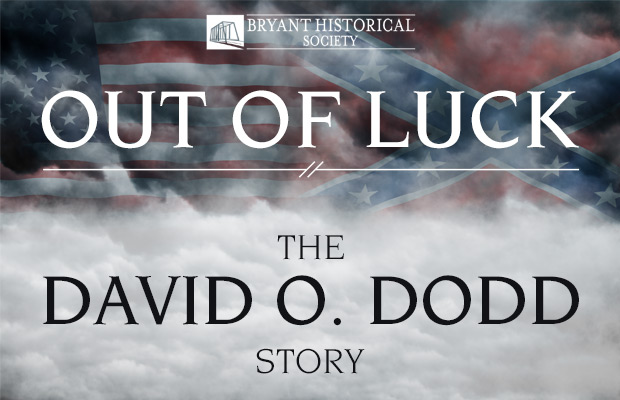 War came to Arkansas in February of 1862, and this year we remember the 150th anniversary of the end of the conflict that turned brother against brother and claimed roughly 620,000 American lives. In remembrance of the historical significance and personal cost of the war, organizations across the nation are bringing the battles and individual stories of courage and sacrifice to light through research material, presentations and on-line educational resources.

The Arkansas Civil War Sesquicentennial Commission was established during the 86th General Assembly to promote statewide observance of the 150th anniversary of the war and assist the development of programs, projects and activities surrounding the War Between the States.

Arkansas’ involvement in the war began as Union armies invaded the northwest portion of the state by Big Sugar Creek and Confederate leaders authorized formation of bands of guerilla fighters to oppose them. Families were split as members chose allegiance to the Union or the Confederacy and eventually, every community in the state was affected by the war.

Arkansan and Saline County resident David Owen Dodd’s life and untimely death is one of the greatest reminders of the personal cost of war.

After having lived in the Bryant area for roughly 5 years, the Dodd family had moved to Little Rock when the Civil War broke out in 1861. David was a cadet at St. John’s Masonic College at the time, but was forced to leave school after contracting malaria. During his recovery, David spent his time learning Morse code, which would play a significant role in his demise.

When Little Rock was captured by Union troops in 1863, David’s father, Andrew, took his family south to Camden although he continued to have business dealings in Little Rock. The elder Dodd decided to send young David, a minor and therefore assumed neutral, back to Little Rock to deliver business correspondence. David arrived in Little Rock on Christmas Eve 1863. He delivered his father’s letters and enjoyed the rest of the holiday season attending parties and dances with 16-year-old Mary Dodge. Mary was a fervent supporter of the southern cause, while her father, R.L. Dodge, was a Vermont native on friendly terms with the northern troops, who were lodging at his home during the occupation.

On December 29, David left Little Rock to return to Camden riding on a mule. As he left Union territory the guard on duty took the pass from David that gave him safe passage through the area, saying that since he was going to Confederate held land he would no longer need it. Instead of heading toward Benton, David traveled toward Hot Springs to spend the night at an uncle’s house. The next day David took a shortcut to get back on the Benton road.

The detour led him back into Union territory where David encountered a Federal checkpoint and the soldiers found his behavior suspicious. Having been stopped without a pass, the soldiers searched him and discovered a notebook that contained Morse Coded message in David’s handwriting. One of the soldiers on duty was familiar enough with Morse code to determine the book contained information about Union forces.

After a brief stop at regimental headquarters, which was known as Ten Mile House on the old Stagecoach Road, David was taken to Little Rock where a telegraph operator translated the Morse code to discover detailed information about the strength and location of Union forces. David was then formally charged as a spy and sent to military prison, which is on the site of the present day state capitol building. For two days David was interrogated by Union officers who were eager to discover the source of the information.

On the third day of David’s captivity, Mary Dodge and her father were escorted under armed guard to a Union gunboat on the Arkansas River. They were transported to Vermont, where Mary was kept until the end of the war. David never implicated anyone, but since he had been visiting Mary daily where Union officers were lodging, Mary’s involvement was a logical conclusion.

After a brief trial, the military tribunal of Union officers voted four-to-two to hang David. It was said there was ice on the ground the day of the execution, January 8, 1864. David wore his burial suit and rode in an open wagon sitting on his own coffin to the site of the execution. The wagon stopped in front of St. John’s College, where David had been a cadet just a couple of years earlier.

Witnesses report that he was pale, but calm and resolute. It was reported that several of the Union soldiers turned their backs on the execution in silent protest of the hanging of a boy.

David’s body was laid to rest in Mount Holly Cemetery in a grave donated by a Little Rock resident, and now, in place of the original simple headstone, there stands an 8-foot marble obelisk with a nearby stone that reads “Arkansas Boy Martyr of the Confederacy.” When ordered to name his informant, David is said to have replied, “I can give my life for my country but I cannot betray a friend.”

Dr. Nancy Hendricks, award-winning author and founding member of the National Women’s History Museum in Washington, D.C., wrote the play Boy Hero: The Story of David O. Dodd, as well as other works relating to Arkansas history. “I had always heard of David O. Dodd, and sought to tell his story in a unique way that would especially resonate with young people.”

Hendricks’s fascination with history, and the civil war era in particular, began as a child when her parents took her to see Gone with the Wind. “I grew up in New York City, but my mother was from Arkansas, which is where we spent most of our summers. Everything in the South seemed so romantic, exotic and fascinating. I suppose it has become my mission in life to help tell those stories in a way that resonates with people, especially Arkansans.”

To mark the 150th anniversary of the end of the civil war and commemorate the extraordinary courage of David O. Dodd, Dr. Hendricks, in coordination with the Bryant Historical Society, led a program May 14 at the Mabel Boswell Memorial Library in which Hendricks portrayed Lydia Dodd, mother of the “Boy Hero of Arkansas,” as he is also called.

“Although his life was cut short, the story of David O. Dodd resonates with many people for his courage, valor and integrity. David went to his death at age 17, steadfast in his refusal to “name names.” His sense of honor would not permit him to betray a friend,” notes Hendricks.

The Bryant Historical Society, led by President Kathy Lewallen, was established in 2008 with the goal of preserving historic buildings, places, tracts and other similar interests within the city of Bryant, Arkansas. Recent efforts resulted in a sign commemorating the battle of Hunter’s Crossing, also known as Hurricane Creek, regarding a Civil War battle that took place in Saline County near the Bryant cemetery.

Hendricks is already planning her next program to benefit the goal. “I plan to meet with the great people from the Royal Theatre in Benton about the possibility of producing the play in 2016 to commemorate the 170th anniversary of the birth of David O. Dodd. I’d love to see it as a fundraiser for the Bryant Historical Society, since the Dodd family lived in that area.”

Dr. Hendricks’s work documenting history has greater purpose than simply re-telling of stories. “It’s important to continue sharing the history and stories from the civil war because the people who lived through that era not only have something to tell us about the past but can help guide us to the future. They were people exactly like ourselves who sacrificed in ways that are unimaginable to us today.”

“Many people think of the United States as something that always was and always will be. However, it came so close to fracturing in the 1860s due to regional differences and issues that drove us apart. In today’s troubled world, it is of paramount importance that we pull together as Americans and to take nothing for granted,” notes Hendricks.

More information regarding Arkansas’ remembrance of the end of the Civil War can be found at arkansascivilwar150.com.